16 Hours on an Indian Track 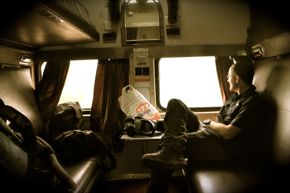 Dahl baht and rice looks pretty much the same at either end of the digestive tract. It’s delivered on a silver tray in some sort of order. Delivery at the other end is another matter altogether. At Saugauli Junction train station it seems to me that the vast majority of everyone’s Dahl baht is sprayed across the sleepers and tracks, baking away under the 35 degree heat, putrefying in the 90% humidity. The stench is overpowering but the thousands of Indians here, milling about, with some gathering in a cluster around us (we are objects of some curiosity) don’t seem to mind.

Our Indian friends, staggering under our packs but too polite to hand them back, make some educated guesses about where should be on the platform in order to line up with the right carriage when the train arrives. It is supposed to be an express of sorts and will only stop for a couple of minutes. We would have been stuck without them for, with no warning, we are suddenly scampering to a new platform, this one out in the sun.  Our friends stop, have a discussion then shift on. Then shift again. They are not too far off the mark for when the train slides to a stop over all that excrement ten minutes later we are only metres from AC1, the solitary air-conditioned box among 30 + cattle crates filled to the brim with sardines (I am allowed to mix metaphors, it’s India after all and pretty much any rule applies here)

We are urged to board quickly, quickly and we scrabble and scramble aboard, pushing up the stairs among Indians pushing hard as well – pushing is part of their DNA. Our packs are handed up to us and we park them in the ‘foyer’ as the train starts an imperceptible slide. The Indian are pressing into their compartments but we have a slight problem. Our tickets, which have just survived 3 weeks in Nepal, have no berth numbers imprinted on them. Fortunately the conductor knows he has two Australians on board and directs us to 3 and 4. Each compartment has 4 berths. We own 3 and 4, 1 and 2 being occupied by some Indian chaps, one who seems very docile, the other loud. The latter tells us he is going through to Delhi and we groan as he starts shouting into his phone. I step out and catch our group of friends standing on the platform, searching for us. I can’t open the window so press my face up to the glass, pull faces, wave and give them a thumbs up. They laugh and wave and look relieved and start to walk off as our train gathers speed and clacks out of yellow shit junction.

It’s a puzzle. We are supposed to be an express but we do seem to stop a lot. For hours we rock and sway through rice paddies, then stop inexplicably at Gorukapur for an hour. We wonder at one stage if we have been decoupled. We gain one benefit  – our two fellow travellers vanish though I did suspect we would see them reappear after an hour spent at the bar. Just when we thought we would never get going again the tea wallah appears. After a remarkable amount of miscommunication he slips away and then quickly returns with a milky chi tea. Bliss. And then we start to roll. So that is all it took eh? Thanks tea boy!

I doze off and wake when we stop again. We pick up another two passengers. One is very quiet, climbs upstairs and settles down without a word. The other is a priest trying to get to Delhi to make a flight connection to Cochin. He is even more nervous about the delay in the train timetable than we are, and paces about when we slide to a stop at Lucknow. How evocative is that name. Lucknow smacks of so much history and as I peer into the dark shadows of the ghosts floating about the station or sleeping on its platforms I wish I could stop and explore the place. The priest only has a four hour window in Delhi so wants no delay thank you very much.

He is a pleasant fellow but is flummoxed by my mix of adornments.  Nepalese guru threads, a silver cross mixed up with some sort of strange Nepalese bead and a Muslim om bracelet. He asks what denomination I am and, not knowing what he is really looking for I dissemble and say Presbyterian. He exclaims “ah”  and nods his head sagely and seems satisfied. John Knox would be impressed that a Catholic Priest has all those anomalies settled by my explanation. I laugh to myself as I think of the Buddhist prayer beads in my pack. Just as well I was not wearing those or all his religious constructs might be out the window completely.

The sun has long disappeared into a hazy orange sky and the train settled into a rhythmic swaying rush into the night. My three compartment companions have turned in. The lights are out and curtains drawn. We are cocooned in our ancient train (think 1971 décor), lights from outside occasionally flashing and flickering through the gaps in the curtains. We have been fed a meal of pickled and curried eggs (which may just end up n the tracks before the night is out) and some rice and Dahl baht. I’m not overly hungry so settle for the eggs and hand the rest back. Then chase it down with some Toblerone I purchased in Kathmandu but had forgotten about.  A pleasant surprise and especially so for the priest and the other Indian camped above him who I shared the chocolate with.

I’m reading Herzog’s account of climbing Annapurna. He was the first to conquer a 8000 metre peak (3 June 1950) though the frost bite cost to him and his colleagues was profound. Not that it slowed Herzog up any – he went to become the French Minister for Sport.  But its helping to keep Nepal alive for me, for that adventure is surprisingly far removed from me and I have only been away from there for two days. Such is the power of what I have witnessed in the villages of Bihar state. The book is a helpful catalyst as I try and work though all I felt about that trekking experience.

Our Indian fellows settled down for the night by stripping to long singlets and wrapping themselves in a sheet as if it were a shroud. I am travelling in a hearse! When the lights went out I was left with the soft orange glow of a reading lamp over my shoulder. I gently rock to and fro as we clickety clack along. These is no real sensation of speed except for the occasional blast of a horn of a train going the other way when a dramatic Doppler effect suggests passing speeds of a couple of hundred miles an hour. Flick flick through the curtains every now and then and soon, with the help of the droning fans pushing back the heat I am forced to sleep.

I wake at 1.  We are stopped at a station somewhere and the usual picture greets me when I tweak back the curtain – crowds of people carrying packages far too big for them. Others lying on mats asleep. Others just standing and waiting. For what I know not. Soon we are on the move again and I let the curtain drop. The train started to slide along with no sensation of motion – only the half asleep Indian on the platform opposite and his slow slide to the left tells me we are on our way. My three fellow travellers do not stir in any way – truly we are a hearse.

Suddenly the lights come on and the shroud in the lower bunk has resurrected with a start. The priest is shrugging himself quickly into his shirt and the trousers seems to append themselves as if by magic. He shouts “Delhi”, grabs his bag and is gone. I never even saw him put his shoes on. I wonder at his alacrity as I try and surface from sleep then see a long line of people on the platform waiting to embark. Aha, we are an express to somewhere else, not just Delhi. I was assuming this was the end of the line. Not so. Better get cracking. It is 4am, possibly the worst time to arrive in an Indian town with no connection. And so begins a day of high farce in a country that is a nuclear power but which cannot sort out its train stations or provide Wi-Fi without you needing a degree in nuclear physics. D’oh, that’s the answer. And another story altogether.