A Scraped Knee a Spiritual Experience? 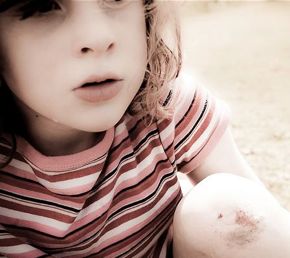 You betcha.  In the inelegant scramble to haul over the edge of a two meter overhang, sections of pelt were left on the sandstone, and down an indented shin the claret seeps. You don’t notice the latter until the hot water of the shower hits the skin that evening and startles you awake.

I came away from the two days of rock climbing profoundly content and tried to test just why that was. There’s a lot bubbling away in the background that could have me flip out any old reason you like for not being a general malcontent. Yet I was deeply satisfied. Strangely so. And in the end I decided it had something to do with those scabby knees and the leaking blood.

When I was eight, or ten, or twelve, or some other ‘boy’ age (only a few weeks ago you know) it seemed the knees and shins always had bark off them. The worst sensation, which grabbed you in the pit of the gut, and threatened the bladder, was the knee gash on icy gravel or rock, most often cut on the roads that took us down to school. Ice hardened spikes of mud and stone threatened us as we skated (agin instructions by mother) down any slippery surface we could find. It was fun until you caught a knurl of ice and you were off your feet and on your knees faster than you could blink, knees scraped and palms bruised and punctured with little stabs of stone. The numbing effect of the cold was little comfort.

Ice. Trees. Planks. Gravel. Asphalt. Steel. Fences. Stone wall. Brick paths. All sorts of reasons behind the slash and the gash. But in every case completely synonymous with our Huck Finn running around the countryside creating stories for ourselves and being, well, just boys. Joyous and riotous living and always with an element  of risk and danger – even if it was only the risk of a neighbor telling my parents their boys were up to no good. Again. (Remember cutting down that tree on Mr Ford’s place? Fell with a crack and whoosh and thump across the Shag River. We ran away as it fell and never did come back to build that canoe so cleverly crafted in our minds eye.)

Anyway, as I climbed out of the gully at the end of the weekend with blood on both knees and legs I was back there, Huck Finn with no shoes, even less cares and a lightness of being that comes only from taking some risks, pushing yourself, feeling some pain, being outdoors in the company of like minded folk and listening to my heart unclutter from the cares in my head. Some once and recently said I was the biggest twelve year old they knew. May it never cease if being a scab kneed twelve year old again is about a freedom of spirit and an overflowing of the soul in this way.