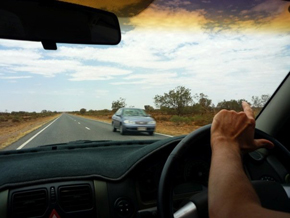 Rarely is the gesture of a single finger ever interpreted as anything except someone wishing the worst things to happen to you or your mother. Or both. Regardless of culture, language or age. Except in the country where a single, brief wave of a finger off the steering wheel is understood by rural folk to mean something completely different again. In some respects it is akin a secret handshake.  A city driver might see a finger waved in his general direction and think he is not welcome. What could it possibly mean? But for the country driver it is the silent equivalent of a slap on the back by a friend. It says “I see you, and even though I might not know your name I know your rustic delights and I share your country burdens. I know the distances between paddocks and the gaps in the bank statements. I understand the fickleness of seasons and the constancy of steadfast neighbours. I  know the dust and I understand the verdant richness of a hearty season. I know you, my fellow traveler, even I don’t know your name and don’t know where you are from or where you are going.”

Of course sometimes you do know it is Fred from the other side of Six Mile Creek. The aforementioned is transmitted and received in the wave of the finger but so too an acknowledgment that generations of farming have bound us together in this place. And that I know your kids are nicking apples from my orchard but since you were kind enough to help me with the rabbit baiting I will keep my mouth shut, and smile as the dust swirls around our vehicles, rapidly hiding us as we slide past each other.

The timing of the lifted finger is a science and art all in itself.   Too early and the passing driver will not see it.  Leave it until you can see the driver and it is too late – you see his lifted finger and know he has not seen yours – he will think you  are rude (perhaps), or worse, a city driver uninitiated into this friendly and open code of greeting.  Just how much the timing is critical only really became apparent as I tried to coach Pete in the finer art of  the lifted finger. On the long stretches of the outback there are too few vehicles to practise on. And it is not the timing which is critical either. The lift needs to be carefully casual and relaxed. Not a wave. Not two, or three fingers, just one. Hand does not leave the wheel. Country folk are undemonstrative after all, and fancy waving just does not cut any extra ice. All that needs to be said only needs to be said in one digit alone.

I like driving in the country, and lift my finger to it every time I clear city limits.