A Gunner in Vietnam – Killed By His Own Hand 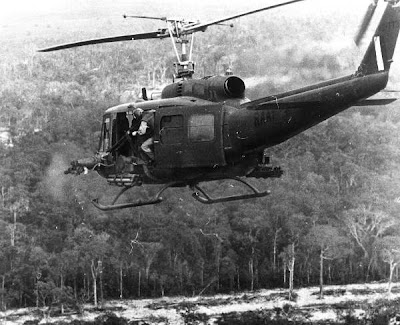 Funny how random things can spark random thoughts. The picture of Spud standing in the rain in Martin Place sparked thoughts over the last couple of days about a good friend I used to serve with. He was an Airfield Defence Guard. For those of us serving in relative comfort in the Air Force he was one of those strange few who elected to live rough, cold and wet. A kind of Air Force infantry who were trained to do what their job title says – defend airfields. During the Vietnam War they did just that but also served as the door gunners in 9 Squadron helicopters. They also mixed it with the regular infantry and in the case of my friend he spent some time with a US Marine unit patrolling the jungles.He was one of those guys you share a barracks with who was always boisterous, loud, happy and on the go. A larrikin. Prankster. Knew all the perks. Knew all the senior officers and who to see if you needed half a sheep for a bar-b-que, your car fixed, or a free ride to Darwin for a few days in the sun at the tax-payers expense. He was nearly ten years older than the rest of us so we all tended to defer to him. Trusted with the keys to the troop’s bar, he would always be the one who closed it, long after the duty barman had gone home. Many a time I woke to hear him singing his drunken ditties as he ambled back to the barracks by himself.

It is an evening that seems to get clearer in my mind as the years go on. I came into the barracks one evening and he was on the floor in tears. When he saw it was me he got up and locked the door and swore me to silence. Then he dragged a military issue trunk out from under the bed, wrestled with the padlock for a while and then pulled out dozens of photo albums. He went immediately to one in particular and spread it and its loose photos out over the floor. It contained a series of fading colour shots of him standing on a jungle clearing with the head of a Vietnamese soldier in each hand. He was grasping them by their hair and holding them out from his body like a pair of gym weights. At his feet there were other severed heads. They had successfully out-ambushed an ambush and his grinning face betrayed the relief they felt. So too the US Marines standing around and watching.

He put those photos away (there were others as macabre) and through his tears told me he could not reconcile, even these nine or so years after the war, how it was that he had been able to “play God”. And he proceeded to recount how, from the door of the helicopters he was able to tap a few rounds behind a running target moving across a rice paddy, make him stop by tapping a few rounds in front him, steer him left or right with rounds on either side, and then cut him down with a long burst just as the runner got to the safety of the tree line. Over and over again. With no feeling, except that it was somehow a game and he had complete power. Now he raged against the abuse of that power and I gained some insight into why this friendly, outgoing, very loveable guy was the way he was: it was all a front. A cover-up. A first class act to deceive himself and those of us around him.

Nowadays we like to think we catch these men before they self destruct with these dreams and images rotting their minds. That we get through all that male, macho bullshit that we put up and expect our buddies to put up. That we catch them and encourage them to talk these things out. We didn’t catch Ian. Ten years later he shot himself dead, still plagued by his “I played God” demon. I hope his Mum, who he loved to bits and who was always rescuing his adult boy, never found those photos.

Thanks Spud for reminding me to remember one of your Vietnam Vet colleagues who didn’t make it. Even though he pretended to.