A Night in Kabul 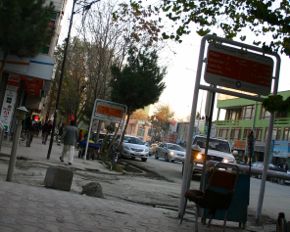 In the same way that Baghdad left me with the enduring image of ordinary folk trying to get on with their lives Kabul is impressing me with the same. Grandma wobbles through the mud on her pushbike. A mother hurries along the sidewalk. A boy wanders along adjusting his kameez, followed by a bear of a father who is carrying an enormous bundle over his shoulder and a lovely walnut stocked hunting rifle in the other hand. The boys across the road are tossing bricks up into the building where yesterday they were mixing and pouring cement.  Unlike Baghdad however there is a vibrant flurry of enthusiastic business and construction activity, some of the latter no doubt attributable to the pending winter months.

But there is a different psychology about where I’m staying that I ever felt in Baghdad. It’s hard to put my finger on it but suspect it has something to do with the feeling of inevitable disaster. Baghdad, for all its ruination was an aberration and its inhabitants came from a place they could remember when there was peace and order. This place has been a perpetual scrap since Alexander the Great came through here, and likely long before that. In a more recent context it’s been on the boil one way or another for forty years and the vast majority of inhabitants have no memory of anything except lurching from one crisis to another. While everyone hopes for a peaceful transition to a new government they all have one hand on their hearts as they say so, clearly hoping against hope.

The sense pervades my impression at the moment. It’s not helped by the grapevine of retired ANA lads who keep each other in the loop about how much explosive is now smuggled into town ahead of the forthcoming Loya Jirga, a conference of tribal and other leaders who will gather here to discuss the involvement of the US after their formal drawdown, and specifically whether the US will keep a small force of trainers and SF types here when the main body of troops have gone home.

My room hangs over our street pretty much. I lie here at night and listen to the dogs barking. Traffic is almost non existent and the street is still and quiet, which means every sound seems to be amplified into my room on the cool air washing down off the mountains that got their first snow of the season last week. But every now and then a heavy truck grinding through its gears, or seemingly missing them altogether has me wide(r) awake. There are two potential targets right next door and I wonder what a truck of explosives would do to this place. Yesterday I stepped into the bathroom without really being conscious why. It was the four by four holding up traffic just near the police station (which has been sandbagged in the last two days). Its revving engine and raised voices cut though my work and I stepped away from my desk at the window and walked into the centre of the hose before realising what had triggered the move. By the time I was back at the desk the vehicle had gone.

Over reacting? I have no idea. But you would be a fool to exist here and not be tuned into what is going on. But what precautions can I take? If a truck load of anything goes off in this narrow street it’s all over. So I shouldn’t sweat something I have no control over.  And I don’t. I am very sanguine about that. But I still see and hear things and wonder what is going on. Why were four men standing on the top balcony over the road, crouching a little and intently focused on something in the distance. It may well have been Bathsheba. But I still see them half hidden and understand their focused body language. Around here everybody is watching. Watching. And watching. Even me.

The suburb is still and cold. I have the window open and enjoy the chilled air washing over me. A dogs scrappy bark drifts in with it. A car moves around the corner and I listen to it and judge its not planning on stopping at the neighbours. At least the open window will help with any pressure differentiation but there is way too much glass in that window. I stack all the extra pillows on my bed in the space where another person might lie. They are none of your nancy pancy first world soft for yer bum pillows. These are soviet soldier tough kapok things that might not stop a bullet but may well help in a shower of shrapnel. Or not. You do what you can and try to sleep.

Footsteps clip up the street and men’s voices carry up on the dark air. It gets the dogs barking. The footsteps fade away and the mongrels settle down and all is still for a few minutes. I gaze at the strip of night sky and think lonely thoughts until the faint beat of a chopper catches my ear. I hear it throb off to the north and die away. Minutes stagger to stall and I wonder if I will drift off and I catch another chopper. This one thrashes in low over the house and I watch its lights come and go. Unusual, the military ones were never lit in Baghdad and they were whisper quiet. Sometimes you never heard them, only caught their bat like shadows in the night sky as they came and went from their lair. One chopper, and hidden in the noise and throb of its passing  I know there is always a second. One medical, the other baring its teeth. Sure enough it follows and then they are gone, to the hospital just down the road. Which I have also discovered is next door to the US Embassy. Any distance to the US Embassy is too close.

The night closes in and the silence fills up. I smile to myself as from a very far distance the signature sound of a C130 is  faintly carried to me through the  cool air. It lands and pull ups, then throttles back a couple of its engines (I always fancied that was the sound of the aircraft sighing with relief) as it taxies to its stand. I wonder what is coming in at this hour. I hear another a few minutes later, as it labours into the night then it faintly drones into nothing. All goes quiet again. A car swishes up the street and I follow it the whole way. Pause. A crump? Was it a crump? Or the sound of the blood in my ears. It was crump. Someone is having a bad night and insomnia will be the least of their worries. Motorbike rattles to a stop, then keeps going. I lie in the dark and imagine the unseen cloud of smoke he is producing and guess there are no lights. A solitary rider on the empty streets of Kabul. I think lonely thoughts. In Kabul.