A Tear in the Eye – Good on you Pericles! 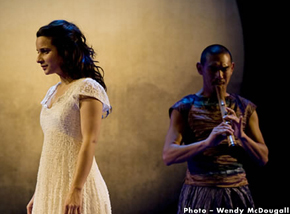 When I was fifteen I sat in a darkened theatre at Melbourne University and waited with bated breath to see what impact, if any, I had made on the production. Weeks and weeks of toil in the woodwork shop (difficult when I was not taking a woodwork class) was about to appear as part of the stage props. The trouble was, the last time I had seen this particular prop the cardboard feathers of the regal eagle of the Duke’s crest were still wet and the three parts did not quite align as I had envisaged them (they never do, do they). I never met the lighting guys but in the decades since I have silently thanked them for covering up those sins! For when the lights came up and the crest was slowly lowered to appear behind the king’s throne in all its golden glory (and the gold effect was very convincing) I could hardly believe my ply and card and PVA glue mess was the same piece of art swaying gently from the ceiling (and on this Spartan, minimalist set, it was the only substantial prop – I don’t count the occasional stool or pot). I was hooked though I hardly heard a word of Measure for Measure that night at all. But I heard plenty of others over the next few years. School teachers got me into the Athaneum Theatre to see a few plays in production and rehearsal and the Melbourne University Players let me slip in the back a few times as well. Sadly, attending live Shakespeare has been thin on the ground since my undergraduate studies at University but I revisited live Shakespeare tonight with Pericles, produced by Bell Shakespeare, a thoroughly animating and engaging production that provoked laughter and moved to tears. John Bell mixed his interpretation with the Taikoz drumming/percussion group and, as strange as it might seem I doubt I will be able to watch any other live Shakespeare without wondering where the instrumentalists are. Their assisting in interpreting the story was profound – almost like another voice. In a couple of lapses of concentration I found myself thinking that Shakespeare himself would have enjoyed them. You will too if you can get to see it in Sydney or Melbourne.