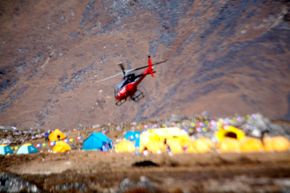 A beautiful day and we get going around midday. In fact at 12:05 as I check my watch and do the slow snow shuffle over the flat towards the start of the track. We have been split into two teams. Group A is climbing to Advanced Base Camp at 17,600’ and will spend the night there. Group B has a rest day at Base Camp. I am carrying a bunch of gear including this heavy sleeping bag, though the yaks are taking our boots, crampons and other equipment. It saves us some work. I feel the weight of the pack has slowed me up so am surprised to discover I am only fifteen minutes behind the time I put in yesterday. Maybe Kevin is right, it’s the burden of this diary that is the real problem! But from the point where we took a break yesterday it is another hour and a half to reach ABC, a slow relentless plod that does not tax the legs of their strength but the lungs of their wind. I started the day by counting out 200 steps and then stopping to suck some water. By now I am down to a dozen steps and then a sip of water, but refusing to stop. It’s a mental game.

It’s a head game as well for I land in my tent with a dull headache despite the hydration, a classic sign of AMS. I am slightly nauseous as well and can can barely eat three spoonfuls of rice and dahl that is served up to me. I crawl into that beautiful sleeping bag (all is forgiven you heavy brute) and try to sleep. It’s a fitful night. As snow melts beneath me the rocks are revealed and my bed becomes lumpier and lumpier as the night progresses.

I am lying half in and half out of my tent, catching some sun. Kevin peers in.

‘Have you heard the news?’

The day started with the usual offer of tea and two sugars and by now I have learned to asked for tea, not ‘milk tea’. It saves me a serving of that muddy mix. It is another beautiful day and our camp is perfect eyrie from which to take it all in. But my headache has persisted despite water and some sleep so I have declined to push up to Camp 1 to explore. Kevin and a handful of others have gone up for a look, and he has just returned.

I shake my head in response to the question.

‘A rope broke above Camp 1. A climber died this morning.’

The following discussion centred on the news that the rope which broke was poly “K-Line” a Korean rope used by fishing boats and not proper climbing rope at all. There is apparently only K-Line fixed to the mountain. It is sobering news, underscored by the chopper that flies in and then out high above us. It was doing a recce and is deterred by the closing weather. We watch it in silence as it vanishes back down the valley.

I pack up and depart ABC along with the rest of our group. As I step off I pass Alfons who has also heard the news. Messages move up and down this mountain with startling speed. He informs me that it is the second rope break that he has heard of up here already, the other happening to a woman who has been injured but has survived. He looked rattled. Maybe I do too. Others pass us on the way down, in a rush and preoccupied. One stops to tell me he was part of the 7 Summits group who had lost their team member. I learn his colleague summited yesterday. The bearer of the news is a very tall and strong looking chap but he was clearly distracted but, equally clearly, felt he needed to talk to someone. When he runs out of things to say I shake his massive paw and wish him the best. He stands still for a moment, as if unwilling to travel on his own, before nodding and striding off. We all descend to Base Camp lost in our own thoughts. And it’s in the descent that I firm up my resolve not to climb until and unless climbing ropes are put in place. It’s an easy decision to make, especially in the light of other stories that are added to the news of the death, the most startling coming from an Austrian who was part of the first summit team, relaying how he fell on two occasions because anchors had come loose. Other have spoken of old and frayed ropes.

As if sensing the mood the cloud swirls in, the freezer breeze picks up and snow starts to fall as I make my way alone down the long ridge to Base Camp.

Despite yesterday’s news I had a good nights sleep but the morning is tainted by the machinations of the recovery of the body from above Camp 1. I head up to the stone outhouse before breakfast and overhear the 7 Summits Irish team leader on the radio coordinating the chopper lift out. No, he is not multitasking – it’s just that the stone outhouse sits like a little two door castle on the top of some high ground, and from which radio conversations are all the more effectively held. He sounds calm and collected but must be very rattled. He gives a weather report for Base Camp and signs off. Kevin is propped on a rock nearby clearly listening in as well. I tune in to the conversation while locked away in the stone privy. There is so much conjecture up and down the mountain I am keen for some solid news. There is none outside the timings being arranged for the helicopter. Nonetheless, despite the bush telegraph so few seem to have heard of the accident and are still planning on climbing. We encounter a number of them heading up the hill. Mind you, if they did not realize a death had occurred after the helo had come and gone they need to wake up. Having said that it is a mild surprise to discover the mountains attract people with no situational awareness at all. We have a couple in our group who are blind to group dynamics, dull to events happening around them, deaf to information and briefings. Everyone is keen to ensure they are only a threat to themselves and yet, on the other hand it is not hard to look out for them. As Charlie notes at dinner tonight everyone here is a ‘calibre person’ and will be happy to climb together again.

The chopper eventually arrives and drops into base camp after doing a circuit of the mountain to check wind and downdrafts. A line is rigged and the crewman hooks on and they are off trailing the crewman through the sky. Shortly after it returns and drops the pair in front of a 7 Summit team who wrap the body in what looks like a flag of sorts. He is then carefully loaded into the chopper which turns and drops off the base camp saddle into silence.

So dinner is a mix of somber and celebration tonight. Somehow the cooks have conjured up a birthday cake for Mike and we sing Happy Birthday in a chilly tent, as badly as the best of them. Then Anselm asks us for a few minutes of our time. He apologises (unnecessarily) for his broken English and then speaks about the climber who died and whose dangling body has hung over us all day. He reminds us that he, like us, came up here to enjoy himself, that he did not die through any fault of his own but because of an accident, because of a ‘cutting rope’. Poignantly he tells us his Dad died in the same way. He then suggests we observe a minutes silence for the climber. We do just that. I find myself deeply moved.

We get a briefing shortly thereafter on the improved state of the ropes but I remain unconvinced. Without good climbing rope I am not going to take the risk of climbing. I will go as far as I can but not commit to second rate rope. I have vacillated on this during the course of the day. Should I or should I not? But the sight of the climber being lowered into camp in front of us made me think of those at home and whether I could do this to any of them. I decide I cannot. And once I have come to that realization a second one strikes me – it is impossible to get my head back into summit mode thereafter.

The evening finishes clear and mild. Okay, the frost is heavy and ‘mild’ is a relative term. Three of the team – Omer, Alfons and Chris are up at ABC tonight. But quite a few are resolved to depart tomorrow rather than try an summit. The failed rope has deterred some and rattled the rest. My risk assessment (scribbled separately) is not a solitary one.