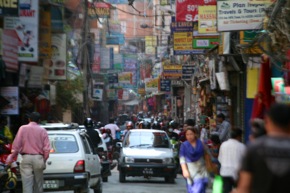 ‘Been here before?’ she asked, in passable English as she thumbed through my passport.

‘It’s near the middle. A fresh visa. Would I pull your leg?’

She looks at me sideways. Some things just don’t translate but fortunately a current visa flicks into view and she carefully stamps the thing and just as methodically scribes 6 November on it. I have to be out of here by then.

She smiles. ‘Enjoy the second time around.’ I assure her I will and scamper off while I have a chance.

I landed here shortly after midday, one among hundreds disgorged from Boeings and Airbus that swamped immigration at the same time. Having a visa helps in lots of cases and in this instance the line under the sign of “Foreigner with Visa” was only four deep for which I was very thankful. But there are two pressure points in the beehive that is Kathmandu Airport – the immigration lines and the baggage pickup. But somehow my bags have miraculously transited three airports and the transfer between two airlines and have quickly appeared among the numerous boxes tied with string that invariably clutter South Asia airports. I am mightily relieved.

The day is slightly muggy but nothing like July weather here. I spend enough time at the hotel to get my gear in my room before heading straight back out onto the streets. They are so familiar and I feel as if I have never been away. I find the shops I need and check prices and then purchase a range of bits and pieces I was not able to find in Kabul, before having a beer and returning to the hotel. It is a surreal experience and I am overwhelmed by familiar places steeped in a sense that familiar people are just around the next corner, and that I will shortly bump into friends. That prescience feels very real and tangible. And it’s not a little unnerving. It’s not a coincidence that I had my beers at the same upstairs café where we all lay reclining one hot afternoon when we came through here to walk the Annapurna Circuit. I gravitated there with no hesitation whatsoever and recognized even as I stumped up the stairs why I did so.

I have taken dinner quite late in the Satkar Restaurant. The food is savoury and refreshing and it prods me awake. I will get back to my room after a short walk and check off that gear list again and plan more shopping tomorrow. And if I get myself motivated I will get out on the streets early with the camera. I confess to not feeling very motivated to do that at all. I think I am wallowing in the appreciation that I am in a city in which I can move about at will, dine where I like, shop where I wander and am not listening for the next boom or popping sound of gunfire.

The hotel is a two star wonder with all the usual shortcomings but these places always offset their lack of facilities by their enthusiastic though sometimes misguided hospitality. However I have never been perturbed by the rooms in these sorts of places as long as the shower and toilet work and the door locks. Oh, and the mattress is firm. I can tick off all these at the Shakti Inn so I am not complaining. I finish the day stocktaking, working out what I should be purchasing tomorrow and wondering what sort of people I will end up climbing with. No one else is here yet as the trip has been offset by two days.

Yesterday I had a long chat with Andy. I wish I had found him when I was here in 2012. He is only metres away from the lane that takes us to the Sacred Valley Inn but his store is lost among dozens like it. The expedition folk suggested we try his store. An Englishman who calls Nepal and Australia home (and counts himself as an Australian) Andy is married to a local girl, and has built a house here and seems pretty settled to me. They make their own gear but also sell other brands and they seem to be doing very well thank you. Clearly the various trekking and climbing companies recommend them as the tiny shop always seems full. They are both very helpful and forthcoming with their advice and are reluctant to sell you something they don’t think you need. And the branded stuff seems to be competitively priced. He told me he had a job back in the dim dark past ferrying buses from the UK to Nepal via Kabul. So naturally we ended up comparing notes about this city but avoided any discussion about drugs. I would put any money on those buses being used to convey a few extra commodities across south Asia. But he was a wealth of local information – which ATMs did not charge fees and where I could get better deals on kit. All in all he is a very helpful fellow.