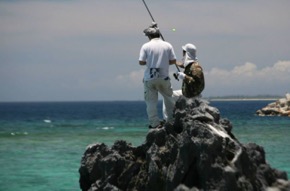 We have left the door to the balcony open and the humid morning air heats the room and tugs impatiently at the lace curtain that flicks around the settee. We are not feeling as pressed as the breeze feels we should be, and take an indolent start to the day. The sea is bright green blue and is barely ruffled by the zephyrs that prowl our ridge, and the jungle is as jungle green as jungle ever gets, home to birds whose song we don’t know but which encourage us to lie back and soak it all up. When we eventually dislodge ourselves from the hotel and roll down the hill in the Blue Angel of Death we have no real plan except to travel north. We have decided that we will poke into places that catch our eye and avoid the one big attraction to the north, a well touted aquarium.

We roll into the traffic, such as it is, and puddle our way up the highway, joining a stream of other tiny cars that look like they have all been hit by a shrink ray, along with their tiny drivers. A speed ray has been at work as well. Or rather a molasses ray, evidenced by the   s   l   o   w   pace at which we make it to the next town. My eye is caught by boat masts though a gap in the buildings and we pull into Nago fishing port. It is more a concrete fort and not as inspiring as it should be. The port is protected from cyclones and tsunamis by massive concrete blast walls more reminiscent of Baghdad and Kabul than a tropical island. The net (too many puns) effect is that this fishing port is surrounded by droll concrete, relieved only by bad graffiti. But we stop and wander around. A fisherman has his float in the clear green water but nothing comes near the ball of bread he has on the hook, even though emerald blue flecks of fish dart about near the pylons at his feet. We suspect he is there for the therapy, not the fish. We leave him alone and follow the coast road north.

Our head is turned by fishermen on rocks and we pull (after taking some crazy, pirouetting manoeuvres in the Blue Angel, crossing traffic and driving into oncoming traffic) over to take some pictures. The hot wind is pushing the sea up around them and they perch on old volcanic shards of rock that spear up out of the water. Pumice litters the beach and black sand chimes in to remind us this is the very volcanic Pacific Rim. As with the previous chap with the line in the water these guys could care less that we were there taking pictures. However by now we are struck by the fact that so few people are about and these two stand out because, well, because they are about. We leave them alone and push the Blue Angel onto a bridge linking an island which looks intriguing. It isn’t in the end. We drive to the end of the road, and follow lanes down through fields of sugar cane and into strips of turtle backed graves. Okay, intriguing if you are looking to see how others live, but not having any unique appeal. We come to the end of yet another lane, to what is clearly a massive concrete bunker destined at one stage to be a resort but which is an empty grey shell. But the local school is using the beach for snorkelling and what appears to be a biology class. We are a bit envious, but we have our own fun poking around the turtle backed graveyards, each one a repository for the bones and ashes of family members. While sealed up now, they can be quickly unsealed revealing a concrete cave underneath. During WW2 families hid in these concrete sepulchres. But so too did soldiers fighting the Marines. It must have been hell fighting through these collections of concrete bunkers, and we wander in silence through long grass and concrete contemplating the struggle.

Having decided to avoid the aquarium based on the idea that it would be overcrowded we make a last minute decision to have a look – if swamped by tourists we would leave. If not we would spend the money. We strode ahead of a crowd of kids following a flag waving leader, paid our stash of yen and joined the throngs of five year olds standing in front of tropical fish with their mouths open. Our mouths open too. Kids. Us. Fish – we all have our mouths open! It proved to be a worthy distraction and we got lost in there for a while. Watching whale sharks, albeit in a tank, is quite something. We are glad we made this stop.

But we are soon back in the Blue Angel of Death beetling our way to Cape Hedo, the northern most tip of the island. Did we mention that it was deserted? Hardly anyone about. No towns to speak of. Isolated and empty tunnels which we explored. Desolate and wild coast with jagged old lava flows and jungle spilling down off the hills into the surf. At Cape Hedo we find one other car and suspect the couple and their children might even be from Australia judging from their accents. But we are racing against the dropping sun and want to get photos, so don’t stop and chat. The photos are not what we hoped but we are in awe of the mountains, the jungle, the clear ocean through which we can see dramatic lava flows and the sense of remoteness.

As we leave Cape Hedo the rain starts and so our slow ride becomes even slower. I am not sure how this blue box on tiny wheels will handle winding wet roads so don’t push it. The asphalt here is mixed up with crushed limestone and we have been warned it can make for a skid pan if we are not careful. We are careful, and we bimble down the coast, through tiny hamlets tucked into every stream inlet. Every now and then one of them will boast a ‘Lawson Station’, something like a 7/11, usually with a small collection of shadows sitting out the front in the warm sticky air. There is never a town centre to speak of but the Lawson Station substitutes for it. We are the only car. For hours and hours as we run ourselves low on gas and enjoy just how empty the place is. This surely is not Japan!