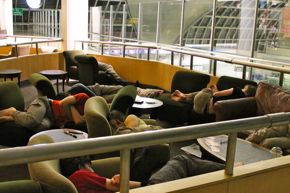 The day starts early. My usual routine is an alarm call at 0530 each day.  So, despite hoping for a sleep-in until 7am, I wake just before the alarm has a chance to prod me and lie awake for 5 minutes before I realise I’m not going to go back to sleep.
Most of the group have camped over-night at the church hall, having a BBQ together with family and then watching movies until the wee hours. Before crashing. There is a sense of disbelief among the group that we are finally on our way  – mixed with a mounting excitement. We reviewed all our gear last night and it seems everyone is in good shape. However A few of us have left our passport photos for trekking permits at home – myself included. So there will be a quick walk up to the shops this morning to get that sorted. We have plenty of time today to catch up on any gremlins.

If you know the ELO song “Don’t Bring me Down” you will appreciate the line “Bruce, don’t bring me down”. At 7:03 this morning I loaded the track into the sound desk, pushed the sliders to max volume and let it rip. A great way to rouse the team on launch day. It didn’t take long for the crew to stir – minutes actually. Breakfast of cereal and then some repacking of packs and sorting of kit. We had a slow start which was helpful since there were a few minor things that we had forgotten so a walk to the shops was slotted in. And a quick run home since I had brought contact lenses suitable for one eye only. D’oh. We have had a lot of fun taking photos of the Rod photos  – he was not able to come along  – trip cancelled at the last second) so he is travelling with us in the form of a laminated A4 sized image instead. We will see where he ends up over the next few weeks. But we have had a lot of fun with them already> In a weird sort of way we want to convey to Rod that we are missing him and that we know how disappointed he is about not being able to come. He would love this adventures.

We cleared check-in and immigration without too much trouble. Took lunch. Waited for the gate to open. We boarded without a hitch and discovered we are all pretty much seated as a group – there was a warning at one point that we might have been scattered across the aircraft. We are all disappointed that in this day and age there is no in-seat entertainment but we make our own – gathering up the back of the plane at various points to relieve the tedium. I think we were only asked to keep the noise (mainly laughter) down three times. After four hours we fly out directly over Darwin and finally clear the continent. We are loitering up the back of the plane and get a grandstand view of fires burning around the city and then the street plan of the city beautifully laid out in white and orange dabs of colour.

We bore out over Asia late into the night. The gatherings at the back of the plane gave us the opportunity to gaze in wonder at an horizon to horizon lightning storm or marvel at the dozens of oil rigs lit up across the South China Sea. We finally arrived after two racetrack loops south of Bangkok and other lengthy diversions in Bangkok airspace. I am very ready to get out of this tube – and once we are in the terminal the energetic hi-jinks tell me that being cooped up has had the same effect on my fellows.  Those airspace diversions don’t really matter as we have another ten hours in this cavernous place and have to kill those hours somehow. The effects of the flight and little sleep soon kick in and everyone fades. It is heading towards 0430. I got a few hours sleep on the floor as the others settled into cards – by the time I woke an hour back I find them all cast about across the Starbucks cafe in various poses of uncomfortable sleep. The girls have turned the lights down for us but the cleaners rattle around, suppliers clatter their trays of pastries in for a new day and well, we are still in a major airport terminal and that is never going to be as quiet as a remote shearers quarters now is it? The upside – not many places you can get a latte and warm muffin at this hour of the morning. Not even (especially) in those quarters.

Next Diary Entry: When in Kathmandu Stick with the Popcorn