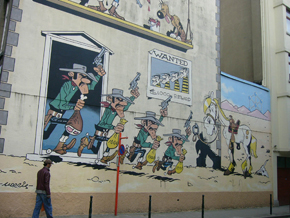 There is a general acceptance that cartoons can indeed be literature although one would need to be selective about which cartoons were selected for the library shelves. As ten years olds, or thereabouts we used to devour Commando Comics. One of our friends had a father who absolutely prohibited “this rubbish” from his house – we smuggled them to our friend under our shirts……but got caught one afternoon when a pile of them fell out at his feet when he was making polite conversation with us in his kitchen. He taught English Literature and we all assumed he loathed them for the low brow approach to story telling which they took. Jane Austen they are not but there are plenty of stories I got an interest in thanks to those cartoons. “Attack on the Tirpitz!” to start with. Very dramatic stuff. And in many cases remarkably close to historical fact.

Anyway, I am off on a tangent. When I was in Brussels (last year now) I was reminded of a collection of cartoons housed in our High School library. They sat beside those of Asterix and Obelix (considered high brow for their puns and language wit) but were barely tolerated by the teachers. Fortunately our enlightened librarian was convinced these sorts of productions could get slow readers interested in books and insisted they stay in the library. Where those of us who were accomplished readers devoured them as much as any one else.

The collection brought to mind were a series of cartoons based on a character called Lucky Luke, a very cool dude who could shoot faster than his shadow. Along with Asterix and Tintin stories the tales and pictures were pored over ,and the handful of us interested in drawing copied them into the back covers of our exercise books.

Brussels was bit of a surprise when it came to rediscovering these characters. The Belgians are proud of the cultural influence these cartoons have had in Europe and in many streets you can see these characters painted in large murals. Including this of Lucky Luke’s arch rivals making out of a bank with someone’s payroll. (Lucky Luke is painted on a scaffolding above them, just out of sight – his boots barely visible). It was in a side street well away from the centre of town and away from the regular tourist traffic or even where the locals hung out. Which partly emphasised how important these characters are to the Belgians. Numerous book shops are dedicated to the cartoon publications, new and especially second hand. To chocolate and Waterloo add cartoons. Top flight literature – in the mind of every Belgian at least. And not unreasonably so.