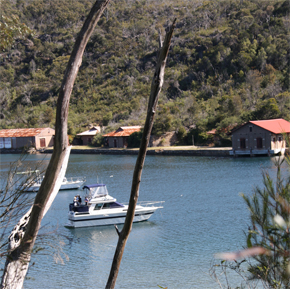 Named after an Irish bay in southern Ireland, Bantry Bay in Sydney is an odd spot. Standing on “the Bluff” at its head you can see Sydney CBD in the middle distance and aircraft letting down into Mascot. If you are paying attention you can just see the top of the Harbour Bridge. You would think idyllic waters this close to the city would be heavily populated and built around but it remains isolated and green despite the residential areas surrounding it and its proximity to the city. The area was used as a munitions storage area from WW1 through WW2 and into the 1970s when it was finally closed. Apparently still contaminated by explosives the old facilities are closed to the public but walking tracks get you close. And if you own a hull you can of course drift in here on a balmy late winter Sunday afternoon that feels more like early summer, drop anchor and break out the chardonnay.  There is something surreal about this sort of idyll in the midst of the city. It is one of Sydney’s best kept secrets. But now you know.