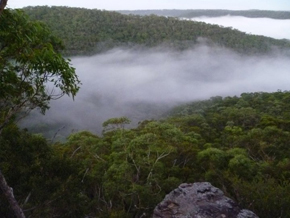 The moon gives up and sinks its visible half into a red bed then vanishes altogether. As I watch, the Milky Way slowly becomes more milky as the sky deepens, highlighting more and more heavenly lights. I’m on my back on a rock ledge and quite comfortable thank-you.  As I gaze up a couple of “shooting stars” scratch their lightening flash of white across the blue grey black, as if to thumb their noses at the efforts of the moon to keep them invisible.We took advantage of those efforts tonight, walking for thirty minutes or so towards Berowra Waters under a “no torches” plan. It was novel for some and of course the moon was more than adequate to light our path and allow us to not only pick our way along but to ambush our fellows in the dark with howling shrieks just when least expected. It can be difficult to discern the juveniles on these outings.

Now we are back with a lot of marshmellows being incinerated around the fire and jokes so stupid they are hilarious being told. I have left them to it and retired over the edge of the bluff a little and stretched out to watch the sky. And to let the medications I have just taken for a grumbling gut to take effect. Either way it is good to let them mix it up themselves a bit. Our youngest is enjoying the big brother company of the older guys and they are not only decent enough to indulge a younger brother with his cub like antics but have established a close enough friendship to allow him to know the pleasure of his company is genuine. Despite, or because of his dodgy jokes.

The valley drops away abruptly below my left shoulder into deepening dark. A light mist starts to shift up the valley from the Waters. The murmur and laughter from around the fire barely penetrates. A kangaroo can be heard making four or five exploratory thumps below me somewhere, pausing then repeating the pattern. Then silence. There are few sounds. Frogs have a small chorus happening but it is no concert. They are far too scattered across the far bluff to make it coherent. Something starts to trill, then peters out, as if intimidated by the prospect of a solo performance. The Saucepan starts to rotate over so I know I have been here for a while. A second attempt to trill is also abandoned. The only sound under this sky is the sound of my resting heart. Even the fireside murmur is still.

I have finally lain still long enough for the sweat to stop. It’s our first month of autumn but you would barely guess it. Something dark above me blurs my vision, blipping the stars on and off. I struggle to judge its size and just how far away it is until I finally realise it is a big beetle doing a low level recon of me. He takes his time, does a few orbits then moves towards my feet and vanishes into the soft darkness of the night.

The fire draws me back and so too the yarns and general nonsense. Its well after midnight and soon the pace slows and bodies start to retire. Some under the tarp but most just flop down around the fire. A couple of hours have drifted on and the sleeping mounds breath and rasp and mutter and roll about. There has been a curious roo which has bounded away during earlier and rowdier parts of the evening. It has stayed just out of the circle of light but close enough for us to hear him foraging and hopping around. He has circled the camp a couple of times. A frisson of reaction from me now as I look up from my notebook to have my headlamp illuminate a pair of blinking orange eyes only a few meters from me. I have the lamp on a low setting so can’t see the animal. The eyes blink and sway as he tries to get a fix on me. I up the wattage and there he is, sniffing the air and no doubt hoping for some pickings. I will keep an eye on him. I have a sneaking suspicion he is heading for the kitchen – our stack of packs with food scattered around about them.

Something of a tradition now – a camp out here involves some charcoal warpaint. Just to prove you have roughed it perhaps.  But taken a step further today with a charcoal makeover. “This stheathons colours are thooty grey with a hint of blaaack…” It looked arty for oh, maybe five minutes. Now we all just look super filthy. Which of course was the original plan was it not?

The flames have a language all of their own. A gentle rumbling chatter which is hypnotic as we all know. I throw a couple more logs on as every one wakes up and wonders why they are so alert at three in the morning. They try to settle back to sleep. It takes far too long to recapture that slumber. The distant rail line has given over to freight to and from Newcastle and the plaintive air horns drift through to us followed shortly later by the rumbling rolling stock. The roo keeps circling the camp. Peter has woken and decides he needs his air mattress rather than toughing it out on the ground (no honorary “Bear” title yet Pete) and, now awake, is being distracted by the roo as it moves through the scrub past his bed.

The radiant heat from the fire, even though not much more than a bed of ashes, brings my billy of water to a boil in minutes. The fizzing and hissing rises to a crescendo and I hiss the water into a milk and coffee mix and take a sip. It’s sweet beyond sweet but that always seems the necessary bush recipe.  The other Pete mutters something about a marshmellow caught in his leg hairs preventing him from sleeping. An interesting trap for marshmellows Pete. Just eat the thing and put it out of its misery will you?

I stoke the fire and lie down. The roo rummages around a few meters away. Things crawl up my legs and across my arms. I lie still and let them explore, even as I push thoughts of active funnel web spiders out of my mind and hope to drift off. Sleep is a long time coming and I dream of doing this again. And again.