Between a Brick and Hard Step 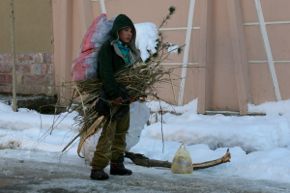 I come up the stairs at the end of the day, negotiating a brick that is placed on the marble step least I step on a pattern that is remarkably akin the Arabic script for God, past the kitchen from which leaks the strange sounds of a woman singing over a crackly radio, and I head to my quarters. It’s been a good day and I feel like I am getting into the business of the place. The brick impresses me. On the one hand I might be critical, at least on a theological or even a doctrinal basis. We don’t worship the representation of the God for that is idolatry. To do so makes no sense if there is direct access to God. Some of what motivates careful avoidance of standing on what is deemed to be holy is formed by an understanding of the nature of God and his personality as well as his office. To my Muslim brethren he is judgmental and a judge, and care is taken not to create any offence. If he is only a judge then I would step carefully too. Well, in fact I do, respecting my colleagues and their worship. And yet God is so much more than a judge and the foundational core of his being, and that which even informs judgment, is love. God becomes a very different entity if we understand him in that context. Anyway, not that there is a critical inclination in me at all. Rather I am impressed with the reverence these people have for God’s name. I wish we had something of it in our own culture. To revere and honour our creator. His name is too quickly mishandled and slighted, ironically mainly by those who would deny he even existed.

Theological reflections in Kabul? Not so strange really. Islamic culture tends to communities that are at least open to spiritual themes and discussion. And in a nation and city dealing with the prospect of unexpected violent destructive summoning to your maker it is perfectly understandable. If I need reminding of that, and I don’t, the now daily suicide bombing that is taking place is a salutary reason to put things in perspective and to dwell on eternal things. And if not a suicide bomber or some other attack the kidnapping of workers is a constant threat to everyone’s businesses and livelihoods. We were reminded this week just how easily that can happen.

But it is not all grim. I think it is convenient for many to say so. It makes their own involvement here all the more dramatic and we are too prone to seek out the oohs and ahhs of those who think this is a tough gig. Okay, it Is not a posting to Brisbane (it’s more like Melbourne!) But it is not all bad either. We found ourselves gridlocked today so abandoned our poor driver and walked back to the office. Past fruit vendors, carpenter shops, kids playing soccer, and office workers walking home from work with their laptop bags. I understand why so many remain behind their bunkered walls (and boy, there are many you could not get a bulldozer through) but all that does is fuel paranoia and fear of the place. Rather, what overwhelms me is not the potential threat but the way a whole population, the same number as Sydney, exist here under that threat. But they don’t live a passive existence. They are getting on with building their country. So many I have met have had the opportunity to live elsewhere on the planet but have chosen to come back here , embrace the risks, temper their lifestyle and build and rebuild. Some have returned from the US where they could have any material gift and live in comparative safety. But instead they are here. It’s humbling to chat with them when you understand what they have chosen to give up. It’s inspiring too. They have a vision and are resolved to see it through come what may. And then there are those who have never left. My colleagues here. The cleaners who rise in their homes while we still dream and who make their way here through a cold city via minibus and foot, risking all for their families. For a salary that is less than a teenager in Sydney makes working at MacDonalds. Yet they serve us so faithfully. Our guards and our cooks. They are grateful for what they can get and in a land of such gross unemployment a job is king. Or at least a prince. Their humanity shines out of their reserve and their shyness as I get to know them. They are unfailingly polite but the ratbag lies just below the surface. Last night I got down to the shops and managed to find some rolled oats (and some Polish fudge!) The cook decided I had purchased some baby food and thought the idea hilarious, sharing it around the staff. It leaked past the language barrier pretty quickly of course and we all had a good laugh – he was embarrassed at being found out. He is in the warmth of his kitchen now getting dinner ready among his clattering pots and listening to something that might well be on the Kabul Top 20 but which sounds pretty strange to my ear. A good natured cook in a warm kitchen bodes well for all of us. Food. Home. Warm bed. Friends. Laughter. Shopping. Jobs. Safety in whatever form we can find it. Security for our bodies and for our souls. Even if it is a brick carefully guarding our stairs against inadvertent sacrilege. Pretty universal themes really, whether its Brisbane, Melbourne or Kabul.