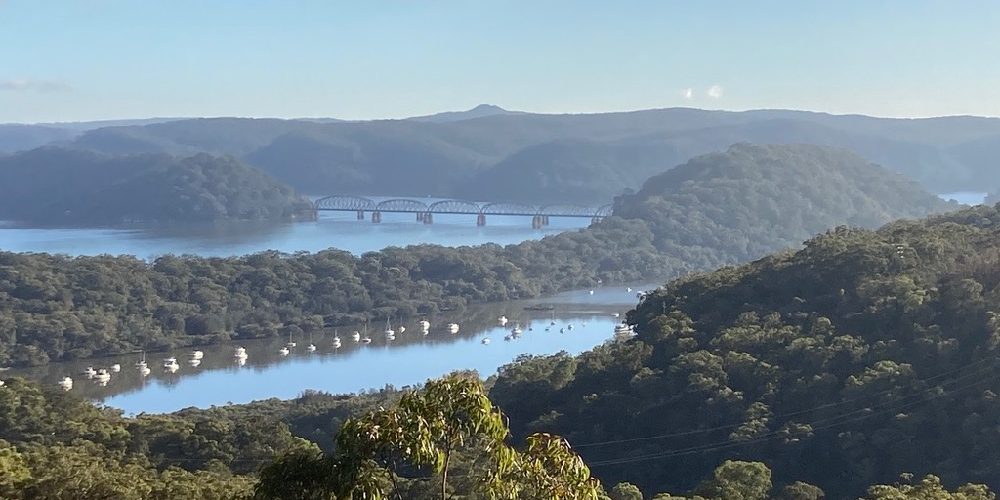 Guy Fawkes night which no one here ever remembers. But is the 5th of November and that was once the highlight of a small boy’s year as detonated and lanced as many fireworks as we possibly could, often at the expense of a brothers military models and dioramas. But tonight there are no fireworks. Right now the remnant crowd out the front of the Anglers Arms is winding down with the usual boisterous voices. Its only 2130 but we are in bed having just dined. Its going to be a big day tomorrow and we have had a long week. So we are trying to retire in time to get up early and get out of here at first light which these days is about 0530. That should mean we get down the track in good time. Chatswood is 47km away which might be bit of a push in one day but we can opt for other finish points along the way. But a full day of walking out here will be quite a nice challenge after all these weeks of lock down.

The boys on the front veranda clearly are making the most of being let loose and it gets a bit boisterous out there even as I write this. Someone  thinks they are getting more and more hilarious as the evening wears on. Staying in a pub so we can get an early start may not prove to be such a good idea.

6 Nov. A rooster started at 0400 but we pushed him out of mind and waited for the 0510 alarm. A few people had been to and fro the bathrooms through the night, the creaking boards in the hall betraying their stealth. We no doubt woke a few as we moved about and boiled the kettle. I am ready to go pretty much the moment I awake. By her own admission Kavitha’s cylinders fizzle to get going at this time of the day.

We walk out the door at 0539 and walk up the street to the start of the track, not overtly obvious but known to us from previous escapades out here.  It is a still morning, the air heavy with humidity but cool and fresh and hinting at a summer day. The birds, apart from the rooster, signal the clearing light and the Noisy Miners call across the valley. A kookaburra makes us laugh not because of his call but because it was clearly struggling to make any call at all. Too early in the morning perhaps.

The launch out of Brooklyn is pretty much that – it feels straight up even though its not but we make elevation very quickly. It’s the nature of this sandstone terrain that tilts up from the rift that marks the Nepean River and abruptly ends at the ocean. The landform is mostly marked by those sandstone bluffs which drop quickly to the water. It makes hard work on the knees on descents and makes for hard work getting up. But in between can be pleasant undulating and even flat walking.   I need to double check the numbers but today we will climb somewhere between 1200 and 1500metres.

By the time we reach the top of the ridge the sun has slipped over the horizon. But we dip down to the Brooklyn Dam and the sun moves into shadow. We won’t come under its direct gaze for another couple of hours and we make the most of the shade. The day is warm already and the humidity stifling. Three runners overtake us as we approach the dam, balloons tied to their packs. A birthday apparently but Kavitha observes the drag it must create. The dam is mirror still and no one else is about. Vapour gently lifts off the water creating a dreamy quality to the scene. Vapour lifting off the water overnight created a single small cloud which marked the site of the dam even when we were far off but it has now moved up the head of the valley and threatens to disappear over the ridge. Visitors coming through here in a few hours will see none of this.

A couple of single runners pass us, moving in our direction and one slightly surly fellow runs in the other direction. As we drop into Jerusalem Bay we pass a strung out collection of walkers, all women. It’s a steep ladder they are climbing and we are glad, even if our knees are not, that we are going the other way.

We land at Jerusalem Bay at 1030 and leave at 1100 after having eaten breakfast of fried eggs, fresh fruit and some protein bars. The pedestrian traffic here lifted markedly It is only a 1.5km track down from Cowan after all and the clear water here is popular for swimming and fishing. We chat for a while with a young chap who is doing a recce for a kayaking trip though his principle plans are to kayak the Hawkesbury over a two week period. We clean up and head for Cowan and this ascent, though pleasant rain forest to start with becomes more exposed and open to the sun at the top. We first run into our wall of humidity marked fatigue here, 9km in. We are at Cowan at 1200.

We hit the usual markers from Cowan at hourly intervals which is the usual pace when we walk this section of track for training. It’s been used to prepare for Kokoda, Nepal, Peru, Kilimanjaro and Aconcagua. So it’s pretty hard going in spots. Joe Crafts creek at 1300, Black Stump at 1350 where we stop for a drink and a snack then at the heights overlooking Berowra Waters at 1430. By now we realise the pace on this track has knocked our grand plans for the rest of the day. We cook up our salmon with garlic, lime and chilli and it hits the spot. A number of other walkers come though and admire the culinary effort. It’s sure nice to have this treat and we top it off with more fresh berries.

We decide to call it at Berowra Waters but we can’t get a cab down here so we walk up to the Berowra Train station. That climb out is one of the steepest in the area. But we are rewarded by an echidna that is fossicking around for a meal, and by a Lace Monitor which wasn’t too perturbed by our proximity. We also feel we have done the day justice – to have cabbed it out would have seemed weak or shortchanged or feeble minded.

Our timing to the train station was in time for catch a train departing in eight minutes time. All our logistics in and out has the appearance of good planning but it was in truth good accident.

26km in the end, according to the signs, 24km according to Google Earth. On one thing we are agreed after walking these tracks for 15 years is that the signs are not to be believed. For general guidance only.

We don’t need any excuse to be out walking but this one was in support of Bravery Trek, a fundraising exercise designed to assist Australian military veterans. I wore my pin and had the pleasure of explaining to one group why we were out doing what we were doing. The fund raising link is here.