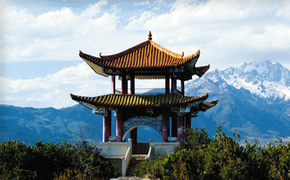 Ten years ago today I landed in China with Ashley, Eric, Gail, Liz, Alex, Jeff, Narelle and a few others on a trip that changed my life. It’s hard to put into words exactly how that change came about. In fact I was unaware of the change until the last day when we are sitting in Shanghai waiting to fly out, and using the spare time to reflect on what we had seen and done up the Yellow River. I was asked what impact the trip had had and initially resisted the idea that there had been any deep impact at all. But even as I nurtured that thought another realisation crashed in and I understood I had been completely disarmed by the people I had met, especially those deep in the minority communities of the old city of Xian.  And in that comprehension I also saw that the barriers I had put up around myself (it’s handy to do when you work in the intelligence world) meant the youth, who I had led and mentored in numerous places since I was a teenager were people I could not name, with the exception of two young men, and those only because they had followed me into the military. I resolved even before I left Shanghai that I would do what I could to pull those barriers down, to allow myself to get closer and to intentionally build relationships that had real meaning. That has worked for me in the most part though it has also created some bumpy incidents that could have been easily avoided had I remained under my old shell. But despite the bumps  I prefer living with what I decided I would become as I sat in that room in Shanghai. It’s a far richer life by any measure.

Sometime in 2010, four years after that epiphany I scribbled the following reflection on that trip, and the subsequent engagement with a group of young people, who by then had been taken to Hong Kong and had been out to the farm on two trips. I’m playing with the idea that my heart had been affected. As indeed it truly has – I’m still a work in progress.

My heart is swollen with

Rupture and disarm me.

It’s an affliction I’m sure

I was born with but

Drowned the sound of the sistole,

Not helped by a diet of tough

Bran of distance and oats

Of on-guard. Serial dining which

Until an affliction of

The valves: mitral and tricuspid

Fluttered in the Sino heat

As the heart’s designer

Changed my diet and prescribed

A dose of richness and generosity

Of spirit, laced with their humility

After which the arteries have

Been softening with age

To the healthy hearts of

Own generosity and patience

And compassion and love.

There is a recipe for

Stuffed heart: but this

For it mixes youth and sage

Unforged but offered up

In kindness anyway, in

The blitheness of youth

Which expects healing when

It is applied. And behold

The seasoning works and my

Heart is surprised. And stuffed

Full of friendship. Full of

Unblinkered faith. Full of an overflowing

Cup of kindness which daily flow

Out of the Creator

And through kith and kin who reach

In and daily massage my heart into

It was the one I was formed with.