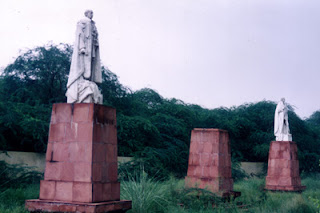 Poking around in Hanklyn Janklyn last night had me dragging out photos rather than diaries this evening. Coronation Park. King George declared this to be the site of the new capital of India. In 1911 if my memory serves me correctly. He did so to a large crowd of Indian rajahs and other important rulers and bureaucrats without realising that when it rained this place turned into a swamp. The capital was moved from Calcutta to the present day site while this proposed site remained an amusing story at the expense of the king.
Nigel introduced the park to us on his little tour as it has since taken on a peculiarly Indian flavour, and a light joke at the expense of Indian Independence planners. After Independence a call was made to remove any symbols of British rule. And the most obvious (collective) symbol were all the statues around the country dedicated to this or that English character. King. Soldier. Merchant. Philanthropist. Civil Servant. It would probably be a safe bet that there are more statues to Brits in India than anywhere else. Even Britain.
Anyway, the call went out. Pull all your statues down, but because we are an ancient people and proud civilisation we won’t be so Vandal as to destroy them. Rather we will gather them all in this park on the outskirts of New Delhi where all can come and wonder.
The great part of the story is that Indians decided that they liked their British statues. None came from any of the state capitals, or any other city for that matter, apart from the new capital. In fact only four turned up. So in this overgrown park there are dozens of plinths, all set up in anticipation of a flood of statues. But all save four stand empty. It is, I think, a powerful testimony to the power of the Empire and the thoroughly ingrained nature of that culture in present day Indian culture. They are proud of it. Mostly.
The four statues stand alone, missed by almost every visitor. Courted by stray cats and pestered by noisy crows. And smiled at on occasions by Nigel and his guests who understand the irony of this lonely and overgrown park.