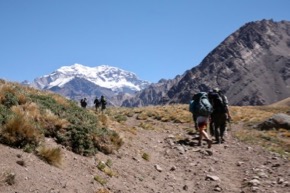 Dinner last night was also a good way to get to know some of our fellow travellers a bit better and the conversation with our new compatriots was a highlight. Kavitha was sitting next to Danilo, one of our three guides and found him to be very forthright and clear about the plans /planning. He might be the answer to some of our communications challenges.

Despite wanting to nod off during dinner we found ourselves wide awake by the time the lights went out – usual, given digestion picks up the metabolism. That was not helped by the fact that the road outside is the main highway between Buenos Aries and Santiago and if there is a speed limit through town no one observes it. Perched three stories above the highway we finally fell asleep to, and were regularly woken by the sound of trucks roaring through this collection of ghost resorts, encouraged no doubt by the long straight section of road in the middle of torturous winding mountain highway that offers no overtaking for very long stretches of time.

We wake to a crisp still, clear day, the sun finally getting past the peaks at 0745 and warming our tails. We’ll see it earlier as we climb higher I guess. I hope.

Vast slabs of rock lift high into the air behind us and even more lift behind that. The camera never captures the scale nor properly reflects the range of colour that constantly draws the eye. Subtle blues and greys, purples and reds, slates and of course an infinite variety of tans. We have arrived at Confluencia, the junction of two tracks, two valleys, two courses of glacier, two rivers, so the name is obvious to even non Spanish speakers. It’s been a pleasant four hours of gradual ascent to 3300m, a total gain of 1000m. We departed the highway at 1100 and rolled into camp at 1500, greeted by Sofia who had prepared lunch for us. Or rather afternoon tea since lunch was actually taken just before 1pm at a bridge crossing which I believe was made for the film “Seven Years in Tibet”. The day has been clear and completely without cloud but even though it started with no breeze to speak of, by the time we get started on the track there is a steady 20km/h breeze snapping at us and continues to do so throughout our climb. As we started we were greeted by a partial view of Aconcagua and as we moved up the valley towards it ‘the mountain’ remained variously exposed though it always seemed to be ever receding. But it is a constant reminder of our goal.

Which is a good thing and a not so good thing as well. The guide Eduardo sets an excellent pace but it’s obvious most people are summit bound and rarely seem to look about. Their tails are up and they stay focused on the track, missing numerous birds including a pair of Seedsnipe that sit in the middle of the track quite unperturbed by our passing. They are perfectly camouflaged in their spotted and dappled plumage. And a large hare like animal got out of our way – much too quickly to get a good look at it. On two separate occasions at that. The vegetation is sparse. Nothing like NZ tussock but at this altitude that is hardly surprising. In fact, we are not too far short of the summit height of Mt Cook, so the fact that there is any vegetation at all is an incredible thing. What marks this place from any other place we have been at this height is the extremely low humidity of the place. About 6-9%, a factor which will play heavily on our performance. We admire an unusual clustered yellow flower, some small white ones and a pink cluster catches our eye but we are the only ones that seem to want to stop and admire. We did stop at the beginning of the day and converse with a descending group of day tourists who marvelled at Australians on the mountain. They no doubt marvelled even more when I mixed my Spanish ‘five’ for ‘fifteen’. We are going to summit in five days apparently. I’m sure they walked away from us thinking we are deluded.

It’s heading towards the end of the climbing season so the track and camp is not as crowded as it might be otherwise. But there are still a few others about and we have to take care with mule trains which move quickly and without finesse as they gallop down the track, kicking up dust. We learn to hear the distant whistles of the gaucho’s who alert us to the mules long before the mules themselves give away their presence. We step to the high side of the track when they approach, not unlike Nepal.

We were worried about the dry climate and the dust. True story. The dust in this wind can be in your face if the angle is wrong, but fortunately the wind usually whips it away from under the feet of those who have stirred it up, leaving it no time to rise to your face, even if those footsteps are only a metre or so away from you.

Walnuts. Ham. Almonds. Olives, green. Olives black and oily. Crackers. Tang. Blue cheese. A feast in the mess tent which we all enjoy before setting up our tents, putting up the solar panels and resisting the urge to lie down and nap.

Mate (mah-tay) is a social drink of herbs and hot water, passed around as a communal drink. Much like tea. However one fills a small bowl with the herbs, then tops it with hot water then drinks all the fluid through a steel straw fitted at one end with a filter. The drinker then fills the bowl (with the herbs still in place) with hot water then passes the bowl and straw to the next person who draws all the water up in one strong sip. Then hands it to their neighbour. Who then fills it with hot water and… so on and so on. It’s very appealing.

After arriving at Confluencia we climb just a little – about 50m above the camp. Then we loop for an hour making an extended circuit back to camp. With Richard and Anna we find, while marvelling all along at the rocks and mountains about us, rabbits and hares. Actually it was hares first, and multiple, while the rabbit was a solitary singular. The hares were in twos or threes and were not only hyper alert but proved rapid climbers. The hare is known as a Chinchillom (Chin-Chee-Yom) and is a big rusty and black animal that knows to keep its distance.

In the course of our loop to the north of camp we find ourselves standing on a precipice with a biting wind coming over its lip, and see the glacier that feeds the Rio Horcones Inferior which runs down past camp and joins the Rio Horcones Superior which comes down from the glaciers above base camp (Plaza de Mulas). In side elevation view it’s not unlike a wine glass – we have walked up the stem of the glass to the junction of the two sides of the glass bowl. Rio Horcones Inferior flows down the right side of the glass, while its Superior sibling flows down the left. We will take a day trip tomorrow up the right side, but our main objective is via the left side. In fact from this precipice can see the trail which tomorrow will take us on a swing up to Aconcugua’s south face and Plaza Francis and which will give us some perspective and some valuable acclimatisation.

First Entry in the Aconcagua Journal