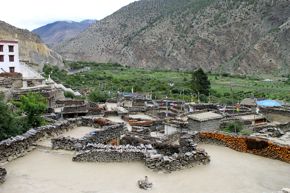 The light, but driven rain taps a distracting tattoo on the glass and smears the view of the river flats which fan out below me. This is the mighty Kali Gandaki Nadi, a tame and gentle beast over these stones and gravel, allowing careful petting as I ford it later in the day, but a roaring, tearing and violent dragon in the gorges further south, a beast which defies anyone to approach. It would consume anyone foolish enough to come near its den. Fluffs of cloud drift up the spurs. The gusting wind of yesterday has dropped back to a light breeze. I have my feet up on the window sill and am leaning back in the chair with my notebook. I was hoping for a hot cup of marsala tea but the kitchen is not open. Unreasonable expectation of me given it is still only 5.30 in the morning. Mick and the other Stones croon their “Follow the River” ballad and underscore the melancholy I feel. If you are inclined to loneliness then this is the place to indulge it, and that is the track to fuel it. You would never come here to find yourself, only to lose yourself. I am in a poor mood to write so will put this down when the track is done and head up onto the roof. Wind and rain are more to my taste right now.

It’s now late morning and I park in Jomson and down a sweet black coffee while the rest of the team catch up. The track has would its way around the edge of the river flats which I admired this morning and which are cast with gravel not unlike the rivers the bubble over the Canterbury Plains. I enjoy them immensely and take my boots off at one point, ford a tributary and take a short cut. Of sorts. I am hoping to find ammonite fossils for which this place is well known but find none. That’s okay. The walk in bare feet across gravel is a boyhood pleasure I had forgotten. The others have ambled past my coffee stop (except I had tapped the window they would not have noticed) so I need to pull my finger out, finish this coffee and get down to the ACAP checkpoint post haste so I can check in with them.

We lunch in Jomson for probably longer than we should, since the next hour and a half we find ourselves walking in light rain but against a punching wind that knocks us around a bit. I finally bury that purple umbrella that has been turned inside out one too many times and is now perfectly useless against any moisture in any form. We are walking down the world’s deepest valley. Really? Really! I double check. So we are. We are impressed with the view but learning that little fact only deepens the appreciation. It’s a dramatic and austere yet rich valley. Rich in terms of horticulture for the peaches, almonds, apples and apricot orchards are in abundance up each little valley recessed into the main canyon. Hardly any wonder that there a large number of distilleries along here.

The group has struggled a bit today, myself included. I warned everyone that there will be a temptation to drop our discipline after Thoroung La. I suspect that we have a little, despite being aware of the possibility. Battling the wind towards the end of the day has not helped.  Marpa is marked by its clean streets, whitewashed buildings and intense horticulture. But also by its unfriendly inhabitants. We are not as welcome here as we were in Kagbeni (did I mention I like that place?). There are no smiling girls giggling at Peter, but rather imps demanding chocolate, and grumpy grandmothers rousing at us. The town looks pretty but its heart is cold. The phrase “painted sepulchre” comes to mind on a few occasions. But then, perhaps like us, it is a town afflicted today by the weather which has been cold and bleak.  We combat the yips with an explore around town, though I have tucked Sarah into bed and we leave without her. Her feet have been grumping and breathing has been a challenge, so a “sauna”, nurophen and some zeds should help. I hope so. I hate seeing any of the crew off colour and missing out. By now we are pretty aggressive with our exploring and bold about which windows, doors and lanes we poke our noses in to. Our route eventually takes us down through orchards, along rice paddy dikes and onto the riverbank where we mess around like a bunch of ten year olds. And where, to my delight I find an ammonite fossil. A rather unique souvenir of Nepal methinks.

We shamble back to the tea house in time to order dinner, sit around and play cards. We listen to some of our own music, Graham works over some Sudoku and others read. While we are so distracted the porters provide me with their own entertainment – they are watching an Indian comedy on TV and their faces as they react to the humour are comical in their own right. I point them out to Chris and the others and soon we are entertained simply by their good humour and laughter. They prove the tonic I need.

I am propped in bed. The power has failed but candles saw us through dinner and the headlamp is doing the trick here now. After dinner Graham held court over another card game. He has been teaching everyone ‘500’ and everyone is enjoying it. Graham has earned the respect of all the team. His tempo each day is impressive and his ascent of Thorung La has earned him his spurs as far as the young pups are concerned. Our guide Lila is absolutely chuffed – in more than thirty crossings of the pass (he says he has lost count) Graham is the most senior person he has had the honour of leading.  I love the camaraderie that has emerged. And as I wind down for the day I am pleased too that Sarah has revived and seems back on top of things. It was a tough day all round. Physically. Mentally. And emotionally. I am a long way from where I was when I started my journal this morning. I think everyone else has worked through a tough day as well and have come out a little more gristly, deeper, wiser, and harder for the experience. None have taken a bite out of anyone else in the process, telling when I think that we are nearly finishing two weeks of continuous walking.  These people have sterling qualities.

Previous Entry: Get Down and Get Medieval

Next Entry: Led Down a Garden Path