Drawing Attention to a Killer 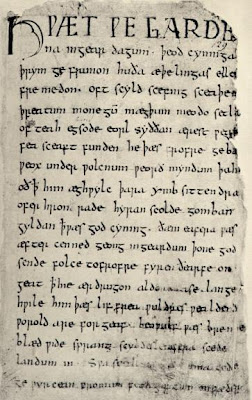 Here is an interesting dilemma which I find rather intriguing. Take your spent fuel rods and bury them somewhere other than near the Hudson River. Then warn off the accidental and the curious who might want to dig the stuff up again – not a good idea if you are planning on dying in your sleep at a ripe old age. Here is the dilemma – what you write on the warning signs might be good for now. We all know the radioactive fan symbol and of what it warns. But what about this stuff that hangs around in lethal doses for ten thousand years. Those warning signs need to be legible AND understandable in ten thousand years as well. The text shown here tells the opening lines of the poem Beowolf. Believe it or not it is in English. The shift in language over 1000 years has been dramatic and few outside of Old English classes can read this text – not even I who spent three years studying the language. I am pretty rusty now. Look how many languages remained a mystery to us that were only 4,000 years old. Clearly warnings around radioactive waste need to have some ready currency in 10,000 years.

An interesting challenge that is actually being addressed by some of America’s scientists. They flag some scenarios that speak to human nature as much as anything else. So we put up warning signs, saying “don’t dig here, a horrible death awaits.” That did not deter those who dug around the tombs of ancient Egypt or of Persia. Indeed, the more vociferous the warning, the greater the attraction. An archaeologist in the year 9007, whose hair has not already naturally receded from his pate and fallen out his ears, might think that the urgent warnings are signs that he is on the cusp of a famous and wealthy find. After all there would be no immediate signs of ill health. One of the more interesting solutions is to seal and bury the stuff without any signs or warnings. If someone is smart enough to find, the hope is that perhaps they are smart enough to be carrying Geiger counters with them – not always a safe bet with boffins. Thinking practically that is.

The Economist carried this article on future proofing nuclear waste bunkers that caught my eye.