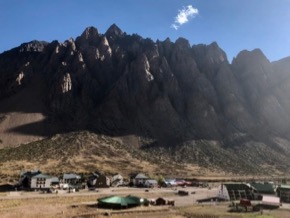 The guide is Tonetti Guia de Montana, (otherwise known as Eduardo, or Edu (Eh-dooh) for short) which immediately brought to mind the line from The Princess Bride “Hello my name is Inigo Montoya. You killed my Father. Prepare to die.” We wait for him now in the hotel foyer in a state of suspended animation. We have all checked out, our gear is piled up at the bottom of the lift and we wait. And wait. And wait a bit more. We have been down to the gear store and hired gaiters (me)  and a foam mattress each. We have also purchased a few sweets and savoury snacks and purchased a bottle of coke for summit day -recommended as an energy/sugar infusion prior to tackling the final push. It’s most likely to be frozen solid when we get there though. Now we wait around the foyer for the guides to appear. They are apparently at the parks office supervising and finalising our paperwork. The TV broadcasts continuous news in Spanish (which seems to mostly include loud, busty, blond, argumentative anchors), and of course the local papers are in Spanish. The exercise of practising our rudimentary Española in the papers wears thin very quickly. We are reluctant to pull out the novels since we know there will be plenty of downtime on the mountain which those books will alleviate. I’ve already read one from cover to cover on the plane so, while I enjoyed it, the purpose of bringing it is made null.  Max and his other gang of trekkers have already departed for their walk from Argentina into Chile. Go figure! After advertising that the trek would be led by Max we know discover that the effort is being led by someone else. We caught up briefly with Cicero with whom we had shared a ride from the airport earlier  – he had come over to our hotel which seems to be the headquarters or at least jumping off point for all Max’s climbing operations. Our heads nod. That we are still a little on Sydney time is not helping. Nor the fact that our sleep has been unsettled thought he night. One o’clock slips part, the anticipated tie to depart Mendoza. As Max warned, we are on Argentine time. Go with the flow. Mañana mañana man.

Well I had barely written that and the guides arrived in a rush and things started to move. They got the bus loaded fairly quickly then farewelled their wives who appeared out of nowhere. We pile in and leave about 2pm and bounce our way out through the outer limits of Mendoza and into country lightly touched by farming – grapes mainly. But it’s mostly rough, unfertile country marked by salt bush like scrub and lots of alluvial boulders which might be fabulous for construction, but are a pain for tilling. The poplars and eucalypts give way to open country and it’s not long before we espy snow covered hills through the summer haze (poetic interpretation of dust). It’s not long before the hills close in on us and we find ourselves squeezed up against a fast flowing, silt burdened river. A train track is in here with us too but it is long abandoned. But despite that it is obvious there has been a remarkable feat of engineering to get the line in here among the vagaries of steep, very steep mountains that offer no gradient respite at any point. Tunnels. Bridges. Revetments to stop rock falls. It’s all to no avail now for the mountains have exacted their revenge for the slight of the steel scar and have cut the track with their own scars of falling rock and scoured hill sides. Old water towers and stone homes, warehouses and engineering shops mark the track, all mostly abandoned. The occasional rail building has been kept in good repair by mule ‘farmers’, buildings no doubt considered a gift to those who are now able to use them.

The valley is starting to impress us with its geology and colour, when all of a sudden it opens up, flattens and spreads into a lush green, flat, alluvial plan at odds with the introduction we have just had. The bald mountains quietly and quickly fall back to the horizon and keep silent, allowing the lushness a voice.  A military barracks straight out of a 1950s promotional picture sits sleepily under the trees as does any number of what look like ‘cabin resorts’ People must come here for the air – the fishing in this brown river would be next to useless. I’d be surprised if anything could survive that sediment load.

In the middle of this verdant poplar lined place is Los Platas, a diner at which we stop for lunch. It is clearly not the ‘hottest’, most jumping place in town – it’s empty, not a good sign given the constant stream of trucks that pour through this place to and from Santiago, Chile. But I guess that means we are in and out of the lunch stop in extra quick time. An old man sits at the till and takes our order for a ham and cheese sandwich and a coffee, while what look like his middle aged daughters float around and deliver the goods in their own time. It’s actually empty for a reason and as we roll out of this town (Uspallata) of emerald green we see dozens of trucks pulled up at other diners. That tells you enough.

The green reprieve is quickly left behind and we soon enter a valley that has echoes of the Mustang Valley in Nepal, or the Panshir Valley in Afghanistan. The rock reaches far above us in vast and dramatic folds of various colours, from white through red and purple, orange and tan, and even basalt back (though this is sedimentary country), and which are shattered and cracked right to their peaks. That rail line continues to draw my eye as I think about the men who laboured to build it. (We discover later it is the Trans-Andean line, built in the 1890s.) It’s been shattered in places by great shards of rock that have rained from above. Striated and cracked and huge, these mountains are striking for their colour which ranges from the basalt black already mentioned to the almost sulphur yellow, with a deep range of ochres in between to please any eye. The valley gets tighter and tighter and we distract ourselves by tracing that railway as it enters and exits either tunnels or piles of rubble.

Suddenly, though its actually been a couple of hours, we are at Penitentes, a run down, abandoned ski resort, modelled after anything you might see in 1960s or 1970s Europe. We split up our gear in the midst of some confusing instructions and once that is finally sorted out Kavitha and I head up the northern flank of the ski slopes and gain a steep 150m as a modest climb high/sleep low effort. In the process we stumble over an abandoned café, out of sight from the road, complete with a fully functioning toilet block with flushing water. There is a tractor used for grooming the ski fields sitting where it was last parked complete with driver gloves which have been left on the seat. It might have been sitting there for any number of years. Apparently the problem is that, having built the ski operations, which are extensive, the snow simply has not fallen in recent years so all this is to no point. It’s a great walk not for what we discover but simply for the fact that we are actually walking on a mountain. It gets our heads into the game and we are glad of that. We spend two hours out there then return on sunset as the wind becomes decidedly cool, deburr thistle seeds which takes forever, and catch up the diary until 9.30pm when dinner is on. 9.30! That’s way too late but there are numerous visitors here as part of a 135km ultra marathon so we have to wait our turn. Every other building is boarded up so these hoteliers are making hay while the sun shines. Given we have not yet slept very well we are hoping the tab up the hill, a long day in the bus and late meal will knock us out tonight.

First Entry in the Aconcagua Journal