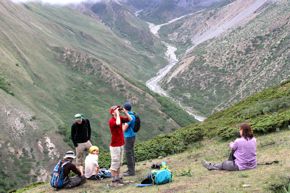 Writing here from Yak Khaka with fingers tingling – probably something I need to watch given it is apparently a first symptom of problems with altitude. Or so I thought – it’s actually a side effect of the dioxin I was taking. We’re now at 13,218 feet in yak country and higher than Mr Cook, my internal point of comparison since I know what that looks like. We are well out of pine country and have climbed up past the Gangapurna Glacier and into the head of yet another valley. It’s steep and very stony country covered, at this point, in low scrub that looks a little like salt bush. Some juniper remains. Slightly built cattle not unlike Angus loiter along the track. Higher up, across the valley I spot something smaller and very shaggy. And very black. A few of these spotted as we go and help give this place its name – Yak Khaka is local lingo for Yak Pastures. Though these pastures are nothing like you have ever seen. Vast, steep and seeming stretching ever upward. And barely a blade of grass in places but lots of that low scrub. And plenty of stone.

We cleared Manang on time and edged up past the Gangapurna Tal. We spent the first two hours climbing above a new river – well, new to us at least. I’m sure its been here a while. Its the Thorung Kola. At one point the track swings east up a ravine and we cross a bridge but not before some fast moving horsemen, faces covered by bandanas after the fashion of “bad guys” in a Western, bear down and overtake us. Lila, walking beside me and deep in conversation about fruit, shouts at one as he gallops past, only his eyes barely visible. The horse wheels around into a snorting stop among flying gravel and the horseman shouts, laughs, and uncovers his face. Turns out they know each other and they have one of those conversations between mates that transcends anything lingual – joking and shouting at each other like schoolboys. But the horsemen are in a hurry – they have things to sell – and they soon push on, dismount and lead their horses over the bridge and are rapidly gone from sight. We catch sight of them on and off later as they skirt the opposite mountain, moving swiftly along a track that has been closed to trekkers for safety reasons.

We move up the side of the valley and arrive at a spot expecting tea but the only living thing on this ridge are three small goats and the occasional bumble bee. We are passed shortly afterwards by Nepalese porters who are carrying ten foot 4 x 4 beams strapped to their heads. And two beams apiece at that. They poke along in a rolling rhythm and we are left behind an in awe. The obvious question – how do they travel along a track cutting around steep spurs with ten feet of timber getting in the way? Very carefully.  And by turning every now and then to point the timber up the track.

I keep looking over my shoulder, and at Gangapurna which we are slowly leaving behind. But its enormity still shadows us regardless  of the distance we are putting between us. White cloud boils over its peak and every now and then I catch a glimpse of the jagged blue/green of the glacier that caps one of its ridges. On special moments the white slabs of snow that prop up its peak burst out of the cloud and a quick glance behind turns into a long pause in mid stride. But the cloud is too thick for a really comprehensive look and we are teased and tantalised the whole morning. However the sense of height remains  – it’s an immense block of rock and ice. You look high and discover you are looking at its naval. So you lift your eyes even higher and discover , when the cloud rips off that you are only looking at its shoulders and there is a hint of mountain even higher. Then the cloud lifts for a moment and you are forced to lift your sight even higher to the crown.

The metropolis of Yak Khaka is less striking than Manang. Like so many places here they are ghost towns in the off season and there is little that commends this place except the prospect of a good sleep. The cloud has closed in around us as we have walked into this town. My legs are well and truly stretched now and I am surprised that we have arrived so easily. There is no doubt that we are gaining some match fitness. As with other small places Yak Khaka is little more than a collection of stone buildings on either side of the track. In this case our accommodation is on one side of the track, our dining on the other. Our rooms are new and surprisingly well insulated though dusty as usual. Timber beams line the ceiling and the round, alpine river rocks line the wall. Our rain spattered window looks down on the coarse, narrow valley we have just climbed up through.

We query the apology.

“It’s really good’. And it is very good, though as I want to point out, even minced cat can be made to taste good with the right seasoning. Dylan is biting into a yak burger and Rod is truly missing out by not being able to get along on this trip. He did plan on eating yak when he was up here and we are tucking into the first yak burgers on the trip.  We finish dinner and sit around and play cards and try to dry clothes in a cool, overcast place. We are not very successful.

Previous Entry: And God Rested on the Seventh Day