Ferry at the top of the Garden (Day 8) 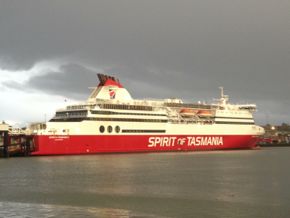 We wake to silent, floating, heavy snow, and  pick our way through a couple of inches of laid down flakes from our accommodation to the visitors centre across the road. A bacon and egg roll and a hot coffee made by someone else seems like a perverse luxury but it stops no one at all. It’s an indulgence we are all prepared to take after a week of home cooking on the track.  We have plenty of time to wait for Paul. I spoke with him last night from a pay phone since the wireless connections made for indecipherable conversations. He says he will aim to be here at 1100 but wanted to know what the road was like. I told him it was snowing in earnest. He said he would throw in the chains and hope that the road was clear in the morning.  I walked back from the pay phone thankful that we had cleared up the last connection we had to make but regretting not bringing a head torch. I walked in the dark by feel back to the communal kitchen – if I couldn’t feel the snow under my feet I veered back into it. The road was covered in the stuff but the forest canopy was keeping the worst of it from coming through. It seemed to work and I arrived back at the kitchen to that roaring fire and the pleasant company of walk weary but very satisfied trekkers.

Indeed, I think back on the week and know that each day I had reason to be introspective and examine how I was feeling. And on each occasion I found myself deeply content, especially in the wettest and wildest weather.  Its savagery becomes my balm, the wild my calm. But the sense of satisfaction also has its roots in the rest of the team and I am pleased with their preparedness, fitness and above all their good humour for that latter quality reflects on their character and spirit when pressed just a little. How strangely I am wired perhaps.

Paul arrived at 1100 on the dot, just as he promised. His arrival is the source of a little jolt, for his cheery face and pleasant demeanor are the full stop to this trek. It is now over. Our walking and striving is done. From this point on we rest in his care and travel in his bus. We are bundled in and are on the road too quickly and I rue the departure as I gaze out at the snow covered forest slipping past.

We arrive back at Launceston and drop off Michael. We farewell him after vouching for his identity. I hope he gets back to Sydney without any dramas. He will no doubt be feeling emotionally hung over as he stares down the next few hours on his own, waiting for his flight. It is a shame he can’t travel with us. We will miss his humour, wit and self deprecation. And he will miss the final group adventure. But my mind is forced to other things as we drive the naked hawthorn hedgerows back to where our vehicles are parked. Somehow  a light was left on in the Patrol and the battery will be flat after a week of sitting there by itself.  Will we have a problem here, placing our connection with the ferry under pressure? Or will the beast  start and stay started? Paul grinds his tractor up to the engine bay, we throw the leads over and the Patrol starts with a hesitant cough. We pile in, farewell Paul and point ourselves at Devonport.

We drive through cold and driving rain to Devonport and are there by 4pm. I was reluctant to stop for fuel least the battery be not completely charged. I top up the fuel in Devonport and we start up without any drama. We have time to wander the empty streets of Devonport and get a bite to eat before driving back over the river to the ferry and embarking. We are greeted by the message from the captain that the weather is ‘a bit ordinary’. Sure enough we pitch and sway and bang our way across Bass Straight. The winds were supposed to be up to 100km and a 4m swell. The ferry moved less than I expected it to and I was asleep by 2200 as were just about everyone else.

We are now tied up alongside in Melbourne. It is 0622 on Saturday. This time last week we were just setting out. We still have to drive to Sydney but I will leave the account off here. A universe shifts in such a short period of time as we fill our lives with extraordinary experiences just by doing ordinary things – like walking in the rain,  through mud and slush, under the canopy of ancient forests and across mountain moors, head down into battering and icy winds, with old friends and making new ones. Just because we can.