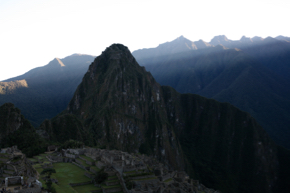 The stuffed llama standing on the terrace above me is a disappointment. “How does a UNESCO World heritage site stoop so low?” I wonder. Its stiff silhouette stares down at me for what seems ages as I make my way to the highest point we can find. Then the damn thing blinks and stalks off in that high stepping, insouciant way the llama does. Not so stuffed after all. Maybe it heard my uncomplimentary thoughts and has moved off in a huff.

We were up at 0300, in the bus line by 0345, at the gates of Machu Picchu for opening at 0600 and among the first on site for the day. It proved well worth the effort. The management of the tourists flooding on to the site is pretty efficient despite the numbers that are pouring up the steep sides of the ridge, their head torches like so many fireflies in the jungle. We of course took the bus. Apparently 6000 people visit the site each day. There were two people in the bus queue when we arrived downtown at 0345 but the line quickly swells and soon snakes up the street and disappears into the dark above us. We are joined by a handful of stray dogs and the occasional queue jumper who is quickly pointed up the hill into the dark. The dogs settle on our feet and drop off to sleep like so many familiar pets. Odd really, but none shifts on. One fell asleep on Kavithas’ feet and was still curled up on the pavement as we pulled away from the kerb at 0530. Clearly they are used to a crowd at this point at this time every day and come for the company and to keep the chill at bay. They are everyone’s pets and no one’s.

We bump through town down to the bottom of the valley, past trekkers hunched against the cold as they make their way to the foot track that launches 400m straight up to the Machu Picchu site. That is the altitude gained – the winding track is apparently 1700m long. The foot track intercepts the switchback road we travel and as we grind uphill in the dark we spot startled trekkers like so many rabbits in the spotlights. There are dozens, perhaps hundreds of them and their head torches create a magical trail of white fairy lights through the forest. By the time we reach the front gate however there no trekkers on the road. Despite that we not the first there. Maybe sixty or so people are ahead of us as we disembark, and by the time the gates open at 0600 the busses have dropped off more than a hundred behind us. Those busses will grind up and down here all day delivering the curious.

Our guide for the day (no one can recall his name but it was something like Edwardo so let’s call him that) has directed the best place to go and our team joins other eager visitors who push uphill along a switchback footpath in the early dawn light. And suddenly there it is. We launch out of the forest onto a stone platform to the classic view of the site as many tourist images broadcast it to us. But as we reach the viewing platform Edwardo suggests we push higher to a site which is his favourite. Some of us are already on the highest ground and being rewarded with images of llamas – the ones I thought were stuffed props. More fool me for ignoring them and missing the opportunity. Edwardo encourages us to roam about and be awestruck until 0645 when he gathers us up on his little platform and proceeds to explain the origins and purposes of the site. He is done by 0715, in time for us to hold our breath and wait for the sun to crack through the saw tooth ridge to the east. Its rays had caught the snow capped mountains in the distance behind us with peach tints, and as Edwardo had been speaking, I had been distracted by the seeping rays that faded into place across the valley, and by the slowly descending tide line of light that crept our way. Apart from the spectacle of watching a sunrise from this site it was good to finally get some warmth. Our bus wait was in a cool 5 degrees C. The day would eventually reach 29 degrees.

Edwardo walked us around the lap of the site that every guide was using (and which everyone is encouraged to do) and regaled us for a couple of hours about the different features of the place. But for all the narration the stones speak for their craftsmen in a language all their own and as we amble through rooms, down lanes and across plazas our thoughts are full of wonder about who lived here, how they lived, but especially how they engineered these stones into place. Interesting is the fact that this site was also the quarry for the stone used here, and the its remnants are there to be walked over. I bet the masons were glad of an on-site source of material. Others Inca sites on high mountain tops had their stone hauled from distant quarries. Fortuitously we finish the lap just before ten o’clock, in a small plaza where we farewell Edwardo and take a sip from a bottle of ginger beer – one of our traditions grounded in the Kokoda trip of 2010. Thereafter we are scattered to explore the site on our own. We had been warned that the crowds really hit the site about 1000 – those coming across the Inca trail arrive about then as do the day trippers who have driven down from Cusco or who have caught the train from there.

Kavitha and I wander off to revisit the points that had caught our eye as we were walking with Edwardo but we were quickly deterred by the crowds that now seemed to plug the lanes and houses and rooms we were most interested in. Of course everyone wants to see this place but the crowd seemed to contain a theme park air as they rushed about anxious not to miss anything and in so doing clearly missing the essence of the place, which is best found in a quiet, reflective spot in the sun. Perhaps ironically the rushing masses intent on ticking a box or taking bizarre selfies left plenty of places of solitude left so we made the most of the ones we found, imagining the academics and clerics who once lived up here.

At midday we all returned to the front gate to visit the bathrooms, have lunch and recover from the heat. The main surge had moved through but the crowds still milled about the main spaces of the site. But it is a vast place and even though you never really have any space to yourself there are plenty of places where you can mingle with just a handful of visitors.  By early afternoon we were done and headed out to walk back to Agua Calientes. The track directly down the mountain took an hour, a lot quicker than an ascent such as we saw under those fairy lights earlier today. We met a young woman perched halfway down the hill, with baskets of fruit and buckets of drinks. We figured ‘her labour worth her hire’ and purchased some Inca Cola (not unlike creaming soda) from her. She had likely hauled her merchandise all the way up here and we are happy to reward her just a little for some of her trouble. We hoped others would stop and buy from her as well but most fellow travellers on that hot descent (there were very few) seemed intent on getting back to town above everything else.

We made Agua Calientes by mid afternoon and headed to the bookshop to grab a couple of histories of the Incas. We are a bit susceptible to buying books we have visited. We then took these volumes to an Italian restaurant and indulged a Piso Sour and a wheat beer (both excellent) chased down by a fabulous pizza made with dough prepared the previous day. It hands down beat any pizza we have had in this country so far (and there is some!) and is unquestionably better than most pizza we eat at home. No wheat beer for the local tourist police though. As we browse our books and sip our drinks, in the neighbouring lane the police encounter a couple of shamans who offer them oily dark brown liquids which are dolloped on the backs of their hands and which the police then lick off. I had seen these shaman the previous day, trotting about with their adorning feathers and beads, and little pots and jars of potions, and took them for ‘stuffed llama’ props for the gullible. For the second time in the day I have to reprise my thinking about what I am seeing.