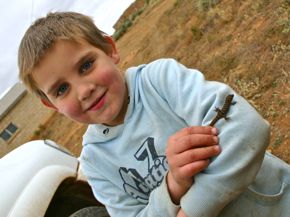 The sun creeps up the wall through the pattern of the window frame shadow and I watch it for twenty minutes before getting up. Andrew has been awake the whole time but remained in his sleeping bag until my feet touched the floor at which point he launched into his new day.  Last night  the “idiot talk” went long into the early hours so there will be some slower starts this morning. Myself included actually.

Oddly enough we are all keen to get stuck into the work under the woolshed again so we all head down into a cold breeze. Those of us who dive under with shovels are canny enough to know there is little to no breeze under there.  Those who volunteer to load the trailers are much cooler off.  We soon get shoveling,  the teams self form behind us passing buckets in and out to the trailers and the humour settles in with the obligatory singing and carrying on. Dannie entertained us all at one point with a jack knifed quad bike. Somehow he had reversed the quad into the drawbar of the trailer he was reversing and it took the team under the shed to take a break and apply some man power lifting the two vehicles apart.

The woolshed was finished by early afternoon which took us to a satay pasta lunch (another secret recipe which is actually a euphemism for “let’s throw any leftovers in here and see how it turns out”). Diners who have been laboring hard all morning are not necessarily a discerning bunch and those who thought they were fussy eaters are starting to get over themselves. So the sultanas and peaches mixed with tomatoes and mushrooms did not deter anyone. Actually the only problem with lunch (if there was one) was my fault. I got carried away with the satay. A kilogram of the stuff was probably too much but the extra spice seemed to work for everyone.

The first begrudging cleanup steps were taken after lunch. The quad was cleaned and put away. The shearing shed was cleaned up. Dannie got amongst the quarters with a broom while the rest of us travelled to the back of the property to check out the wreckage of a wedgetail eagle nest. Part of the appeal of that trip lay in the fact that we got to see a large section of the property this team would not usually see. We travelled with Brian, a 72 year old contractor and his delightful niece (Ellie (11)) and nephew (Bo (5)) who are the quintessential country kids with their elastic side boots, broadrimmed hats (decorated with sheep tags) jeans and wide smiles. They fitted in with our lot so quickly  – I think Ellie is going to miss the boys when we leave tomorrow.  Ellie was adept at catching skinks and lizards and turned up with a handful of geckos she had unearthed behind the house where they are staying, proudly introducing us to her ‘pets’ before jumping on the back of her grandfather’s truck with Pete and Pete where she was quickly misled into all sorts of daft antics. The wedgies nest was an impressive pile of timber that yielded bleached bones of small animals, mainly parts of  skulls, but never enough for us to get a good fix on exactly what the animal was. Small possums was my guess for some of them but there was something else in there that might have been rat. A meal of “rat o‘eagle”.

The boys have been pointed in the direction of the kitchen and Rod and Sarah told to vacate. So dinner will be an interesting adventure. But it’s worth doing since the guys, happy to work hard outside, are inclined to step back and let Rod and the girls do the domestic chores. I don’t want to run this week by roster if we are to keep the relaxed approach to it but if there isn’t a little bit of rigour we would quickly drift into a mess. So while the vegies are being prepared  by the lads Rod, Sarah and I are sitting in front of the fire which the smaller boys have gotten going, have turned up the music and are attempting to get a bit mellow. It’s a good way to start wrapping up the week.

Everyone is unanimous in their reluctance to leave this station. They have grown a new appreciation of how intimate a remote location can be. Here is where we can be and have been reflective. Here among the saltbush with no internet or other distractions we interact with each other like a big family, including the occasional squabble which is quickly put to rest in the interests of the overall experience. It does help that with a large group there are many who can intercede in the moments of fractiousness. But it is here that we forge our friendships a bit deeper, we confide to each other a little more, give up and yield some more of ourselves to others and temper our trust in each other into something a little more durable. I think it’s that trust in each other that I am learning to appreciate about our FFBC crew. This evening is an example of that. We sit flopped around in front of the fire very relaxed and cozy in the company of each other. This unspoken intimacy in our friendship is a currency worth more than anything I could buy, or trade, even if I wanted to. And I sure do not.

Joy has just left us after an evening of dinner and conversation. Every chat reveals something new about her history and that of this place. She wanted to be a botanist when she was at high school. She and her father produced a botanical reference guide to the plants of the region when she was in Grade 6, a document she was startled to discover still sits  in South Australia archives.  She did a great job turning some old date scones into “bread and butter” pudding which was scoffed down in no time flat. She regaled with some background of Ellie and Bo and her connection with the family, which is typical of  many rural connections. Family and other kin appear on the scene of just about every layer that is peeled back. But that is what makes the fabric of these communities so interesting.  We chatted about cattle dogs, boundary fences, neighbours, cooking, tourists who seem to think they can camp on her land without permission, road washouts, family and of course the weather.  Signs of weather are always interesting: the previous evening we learned that if we could see a bright Milky Way there would be no rain.