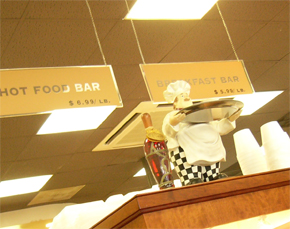 This country still has the capacity to surprise me. Mainly with the little things – launching an air-strike against someone in the middle of the night on the other side of the globe, or firing off yet another shuttle from Florida are so passe. But this morning, sitting behind the Capitol in a hole in the wall cafe for the first time ever, I paid for meal by its weight! Now that was a surprise. No one else thought it unusual. A couple of cops, one African American, the other Hispanic, paid no attention to their beat and spoke about the relative merits of reps in their weight training regimes. A homeless man shuffles in under their noses and helps himself to 3 sachets of butter and shuffles out. The guns stay in their holsters. (There are about ten patrol cars parked within half a block of us, mainly around the Library of Congress, but if anything “was going down” these two were ignoring it). Slow, drawling, greetings to one another as various patrons moved in and out, often to the older Chinese matron who was manning the till. Her sing song Mandarin choruses with the ting of the till tray and the light clatter of change, and competes with the police radio chatter that cuts through the weight training conversation. The smell of hazelnut coffee and turkey bacon draws us all in.  Its a busy little place with a lot of elderly folk catching a late breakfast. I wonder where they all come from since we are so close to the government buildings, all imposing and intimidating and covering acres apiece. Therein lies some of the appeal I guess – a homey eatery in the shadow of the Library of Congress with its own novel way of calculating the cost of the meal. Not cowered by its position at all!  I had $4.00 worth of eggs, bacon, coffee and hash-brown

– can’t remember the weight though. I think I was being distracted by matron weighing what I had picked up at the servery.