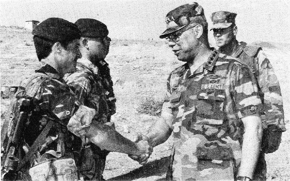 I have always enjoyed (and admired) this photo of the General. It contains a few interesting elements. For me at least. Let me try them on you.

Its the end of the First Gulf War. So called – there have been Gulf Wars here since Nebuchadnezzar was a wee lad. One of my brothers had spent some time larking about behind the lines when things were smokey and noisy but when all that settled down he found himself up in northern Iraq as part of Operation Safe Haven. Remember that? The half baked program which lifted a token finger against Saddam eating his own. In this case the Kurds. Again. Anyway, during the course of this madness, in which he watched more Americans injure and kill themselves in stupid vehicle accidents than he had seen people injured and killed in the shooting part of the war, along comes said General. Who was somewhat nonplussed to have an Australian shake his hand and to hear “G’day, mate, ow yer goin?”

Apparently so, since none of us were there to witness the meeting. In fact little brother never let on he was in the war let alone sharing dusty handshakes with Powell, and there was no evidence of such escapades until this photo surfaced in a military magazine some time later. I am inclined to believe that is how the conversation went, if only because the staff officer standing behind Powell looks like he has just had a hard chew on a salt laden lemon. I can imagine brother’s laconic style not fazing the General but staff types tend to bristle at the relaxed nature of the Australian military approach. Its been like that ever since we sent troops overseas to fight other peoples fights.

Anyway, an indulgent post in which I share the pleasure I get from this photo every time I see it – for the thoroughly understated way my brother goes about things, pride in the same but also in his achievements (what is family if you can’t take pleasure in the success of siblings?) and a resonance with his humour, to which I am in tune and for which I applaud his audacious and cheeky use of it. I just wish I had been there!