(16) Get Down and Get Medieval 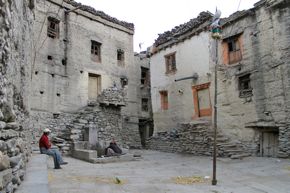 It’s 6am in Muktinath and the town is already moving. School kids across the road are already dressed and are joshing about as school kids do. There is plenty of horseplay underway as I walk out on to the street. I ignore them and climb up above the town and am reminded by my lungs that we are still at 15,000’ or so, a quarter of the height of Mt Cook again. So I slow down. From my modest eyrie, with the large Hindu/Buddhist temple complex scattered across the hill on my right and “main street” on my left I watch the place wake up. Below me a young woman keeps a calf from its mother with one hand and milks into a pewter mug with the other. When she is finished she encourages the calf in to breakfast, picks up both her containers and walks inside. A worker, or so he looks, winds his way along the main street with a very cheery whistle. An elderly woman appears behind a slow moving goat which she twitches along . The goat ignores her as best it can. Two Buddhist priests move the other way, just ahead of a lad walking two heifers, slowly enough for him to be leaning on one of them as they drift along.

The breeze starts to stir the prayer flags but it also blows in the cloud and the temple complex (it actually has no specific name) abruptly vanishes. I shiver. Main Street and the Hotel Royal Mustang fade out as well. Still, business moves on and the shop shutters clack open on the guest house immediately below me. It caught my eye as we walked in yesterday Its stone-work is perfect. As is the stonework for quite a number of buildings in this town. I watched a team of navvies working the pouring of a second story slab for what looks like a new guest house yesterday as I indulged a fresh coffee and hot apple pie (don’t tell the others!). The formwork wouldn’t pass any standard at home but compared to what I have seen over the last ten days it would have to rank ‘up there’.  Being the off season , and with the ground not frozen, every village has been busily engaged in some sort of civic work or new building construction. Roads are ripped up for new drainage, rocks are being busily carted, chipped, shipped, set, pointed. And of course, being spring, gardens are in full flourish with second crops of just about everything being planted as well.

Bells clang and bong out of the could signifying goodness only knows what for the faithful. Little else has happened in the last half hour. People have appeared on the flat rooves of their houses to stretch and scratch themselves awake. No one seems to notice me perched on this rock on the hill – it’s slightly and uncomfortably voyeuristic. The traffic up and down the street has picked up a little, most people carrying pails. The cloud still wraps itself around us all and I still shiver.

The girl next door is getting married. It’s going to be a very syncretic service but mainly Buddhist. By 7am the various ethnic dresses can be seen among the guests as they mill around the town square into which our tea house opens. All dressed up but nowhere to go. Not until 10am at least. A priest stands at the entrance to the temple – conveniently directly opposite us –  and supervised the raising of Hindu and Buddhist bunting. I watch from our restaurant window on the second floor, hot sweet tea reviving me from those cool shivers, as the bride’s sister flits to and fro from the house next door to the temple. She’s a busy girl. Unlike our team who are all still in bed. My host sits down with hi sown cup of tea and tells me something of Muktinath.

Muktinath sits in the valley which was once the principle trade route between Tibet and the lowlands and India, salt coming down from Tibet in exchange for rice which was shipped north. In winter time this place is so bitterly cold those who were able would head down to Pokhara where they would trade herbal medicines. They would leave the old and infirm behind in two story houses, the lower story housing the animals which provided heat. A stack of firewood, salt and flour would be left as well. On their return from Pokhara each April the inhabitants would bury their frozen dead, unlock and revive the place. Electricity, concrete and gas has put an end to all that. But only, as my host and provider of hot sweet tea noted, in the last twenty years or so.

Wedding preparations are warming up. The Bra Boys of this town are those lads who ride those feisty little ponies. Today they are jangling through town with bright colours and bells, riding with no hands to the admiration of the gathering crowd. The ponies take precedence – those who have arrived on motorbikes (mainly Chinese mounts) are asked to park them away from the wedding event.

At 10am sharp all the decorated ponies are wheeled to the front door of the bride. She appears in all her finery, looking demur and at the ground. As I decipher what is going to happen next I skip down the street ahead of the expected procession and prop on a dirt bank. A few minutes later the bride, escorted by singing and laughing characters in their Sunday best (which includes top hats laced with gold ribbon), pass by underneath me. Only the bride, playing a role I assume, is behaving in a demur way. You would want to ensure your fiancé was competent on these ponies before you propose – a couple of them get out of line and her steed unsettles but she barely bats an eyelid.

With the town square now comparatively quiet we take a walk up to the Muktinath temple complex. It’s the fourth largest of its kind apparently and attracts pilgrims from  all over India – and the town appreciates the accompanying investment. It’s a syncretic set-up, a mix of Buddhist and Hindu faiths represented by a number of wily looking, saffron clad holy Hindu men, channelling a bit of Bob Marley methinks and indulging some of this nation’s finest herbage loiter at the entrance. If they are the high priests of this order I’d be disappointed to have these chaps greet me if I had trekked all the way up here from Goa. Still, its an intriguing complex and we wander around before picking up our packs and heading down the mountain.

It’s a short walk of four hours to Kagbeni. But its done against the most remarkable backdrop of bare mountains, many of which have been riven in two, revealing dramatic rock folds. We drop down through terraces of barley, pretty much following the contours until we reach Jharkot village where we stumble over the wedding event – the groom lives here. A red banner over his front door conveys best wishes to “Romeo and Juliet”. We press on down, past a goat herder with two hundred of goats or so, who begs a light. Fortuitously I have a lighter in my pocket so we try and get him lit up in a growing gale. It’s a futile task so I leave the lighter with him and continue walking. The track takes us out onto a plateau across which the wind now rips and buffets at us. We reach the other side and far below us espy Kagbeni, our next stop. It takes another forty five minutes to wind our way down there of course (I no longer make  any distance/time assumptions) by the ‘main road’. School kids take less well defined tracks down the side of the mountain and quickly overtake us. I am sorely tempted to follow but the pack + wind + um, I’m the trek leader = behave yourself. Another time, when I am on my own, I will follow those goat tracks.

Kagbeni is one of those places begging to be explored. So after lunch that is the plan. Kagbeni, a medieval outpost, has been here for centuries and it looks like it. It sits on the crossroads of two trading routes – one up to Tibet via the Mustang Valley and the other over Thorung La through which we have just walked.  It’s home to the first Tibetan temple in this valley. 700 years old, its opened for our viewing pleasure at 100 rupees apiece. That’s okay. It’s an interesting place, not for any of its  faded artwork but for the fact that the young priests invite us to take photos and to have  a play  on their instruments – some sort of cross between a flute and a cornet. I leave the team to that entertainment and climb up onto the roof where I have a panoramic view up the river into the lower Mustang. The rest of the team eventually find me there and we have a good look around. The temple exhausted, we took an explore around this ancient place. Winter dictates the architecture – stables are the basements above which the residential units are built. Everything is heavy adobe or stone, plus timber and all closely wrapped around a courtyard which keeps the wind out of everyone’s hair. It makes for a remarkable rabbit warren of a place and a turn into a tunnel can pop you up in any unexpected place –  a family compound, a garden, another lane, a goat pen. Or even another community courtyard.  Needless to say it makes for a childlike afternoon, poking in and out of places. The locals are very accommodating and a hearty ‘namaste’ said with enthusiasm and a smile will almost always disarm them (with one exception – one old lady gave me the bird and screeched ‘no camera’).

The towering, crumbling buildings sit at the end of a spur through which runs a heavily silt laden stream. From it numerous races and channels are diverted and these feed a plethora of gardens and orchards. Apples, grapes, peaches, fennel, barley, rice. And flowers. In such a bleak place every stone wall seems to have hollyhocks peeking over the top. I love them. Willows are planted and propagated everywhere, usually, and mostly to contain that tumbling, energetic stream that runs down through the town  barely, it seems, under control.

I finish the day with a dinner of momos and the opportunity to convey what Brian, a solitary trekker we keep meeting, had to say about the group – he said he was impressed with the cohesiveness and spirit of my team.  I know it but am delighted to hear it from an independent source. The power goes out so we dine to candlelight. The power comes on after ten minutes but we are enjoying the ambience so much we keep the candles going. It’s a pleasant way to finish a pleasant day. I think I like Kagbeni. Actually no, I do like it. But its only a summer holiday home that I would build here. I suspect I would be too chicken to handle winter.

Previous Entry: You All Pass (With Full Marks)

Next Entry: Down and Out In Marpa