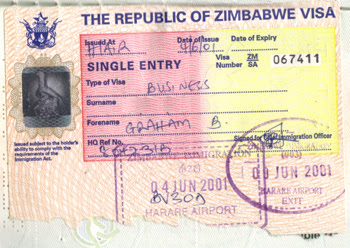 Visas tell their own story. I love the Stalinist overtones in the art that remain in the Vietnam visa. Those from the Middle East reflect their fascination with “bling” – they love foils in their documents. But this visa from Zimbabwe has its own little story. As you may know this country, once the bread basket of Africa, is now the basket case of Africa. Sadly so, despite incredible resources and a sound infrastructure on gaining its independence. Even when I was there in 2001 I met with bankers and businessmen still buoyant about what was possible with their country as they funded new development in Harare. Mind you, in one quiet moment one local banker scratched his head and wondered how it was that foreign investment was pouring into Botswana (next door) and not into his country. We all knew the answer to that, but there are moments when diplomacy has to rule a conversation.
I flew into Harare, easing in over a remarkable bouldered granite landscape which looked not dissimilar to some parts of Australia, and arrived at a modest airport, though recently renovated, so everyone was very proud of it. It is about as exciting as Canberra Airport – O’Hare it is not. Three of us made the mistake of wearing ties and carrying laptops. We were each escorted into our own rooms and left alone for a few minutes. I started to expect the worst. After a while I was introduced to a guard, who was more congenial than I was expecting. But with my defences up I missed his oblique references to payment. It took a good five minutes before I realised he wanted USD100 for a visa. I rarely carry cash but I happened to have USD250 in my wallet. I tried to hang onto it for maybe another five minutes before realising that I could be here for a long time. We were the last flight, and I could see through a crack in the window set high in the door that the airport was now empty of passengers, and that staff were packing up to go home. The guard assured me he was there for the night. Said with a smile of course.
I coughed up the USD100 and he vanished. Resigned to being shafted in Zimbabwe and not doing the business I came for I was surprised to see him shuffle back into the room with a book of visa stamps. He duly issued the one you see here. As I left my cell, sorry, his office I was accosted by another guard and dragged into a second cell. I really thought it was on this time, but here sat a rather abashed fellow traveller from Europe who had absolutely no cash on him. And these ratbags would not take credit cards! Another USD100 later and the pair of us walked though an immigration barrier with no officers in attendance – the chaps I had paid had stamped the visas as well is issue them! A one stop graft shop. In the foyer of an international airport. Well, one that pretends to be one anyway.