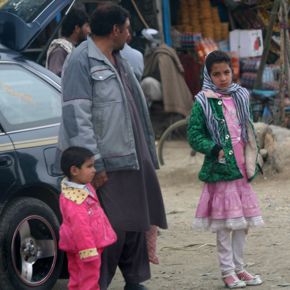 As we roll into election week there is a fragility of life that stabs us every day, despite the so necessary ‘get on with living’ attitude that pervades this place. An attack yesterday – or was it the day before, it’s easy to lose track – on a guest house is applauded for its failure, for the efficiency of the security forces  (rightly so) and for the survival of the intended targets. Yet a ten year old girl, an unintended target, died. Found in a ditch nearby after the security forces finished off the insurgents.  So too a couple of local lads employed as guards.  Both dead.  I look at these people in the street and wonder what their hopes and dreams might be. Not the collective ones of nationhood and security, but the personal ones.  I wonder that about these three that died. What were their hopes and dreams?  Who loved them with a brotherly and sisterly love, that love now turned to mourning? Who loved them as lovers, heads together as they dreamed shared dreams?

I wonder at everyone who lives here, living in this darkness, on the edge. It’s a bustle and energy and zest that happens under a shadow. But there is a hidden world if you peel back the very thin veneer. Citizens travel with weapons carefully hidden. Caches of arms tucked away in case the madness erupts in their small part of the city and they have the slightest chance of fighting back. It’s not enough to save a child who might have had the street smarts to know something was going down but was not able to save herself. There is a hum,  a vibrancy and a joy of life in this place. But having gained it. Having tasted it with the tip of their tongues these people are not going to put the dish down if they can at all help it. Ironically violence therefore remains within arms reach.

It is both a comforting and a disturbing revelation. And it is unsettling too for the fact that you suddenly realize you are swimming with sharks. Fed ones admittedly, but in this large school of silent, watching, always watching predators, you never know which one might just want a taste. Watching. Watching. Always watching. The streets are a thousand thousands eyes, all watching, none sleeping. The boy collecting scrap. The old man pushing a wheelbarrow of cucumbers. The orange seller. Every uniform. The young man selling knock off sunglasses by the hundred. It is not a matter of being safe here. It is a matter of being known. Of not being anonymous. Because being anonymous might just be threatening. If you don’t fit in you may just be a threat to the uneasy stability of the place. Anonymity is difficult in any case. Even the big American in his salma kemis couldn’t quite pull it off at the clinic yesterday. Be known and be owned. You have to accept that this place owns you whether you like it or not. Everyone watches. Everyone has their corner to stand on. Everyone is connected to someone else. And everyone and every other can reach for something to protect whatever they think needs protecting.

And that of course is the fundamental issue. The principle difference between this emerging state and one where law and order knows its place. Kabul remains a city of every man for himself, to do what is right in his own eyes. Or the eyes of the family or clan. So as you move about town you can never be sure what motivates anyone to do what they do. Is it really the building of a new state and the preservation of her interests that is behind the interrogative state as you catch the eye of one of many standing on a street corner as you wait to turn into the traffic? Or are the cogs that you can see turning there opportunistic cogs? I can’t be sure even as I search for a gap while using my elbow to double check the door is locked.  The best you can hope for is wild first shot and a gap in the traffic. I get better than that and the black eyes turn away and we slide in to traffic and head down town. At the same as we are doing that the headquarters of the Electoral Commission comes under sustained attack and the news carries the siege all afternoon.

A ten year old in a ditch, a footnote to the news, and we don’t learn her name. Victim to an irrational madness. It’s a shame someone with their hidden cache of weapons was not able to defend her. But then I don’t want this place to devolve to appoint where the citizens feel the need to resort to such measures. A free for all. So perhaps she is sad evidence of restraint in this town after all, and for which I should be grateful and glad.  Regardless of its vibrancy, this place is lost again if it sinks to every man reaching for his gun.