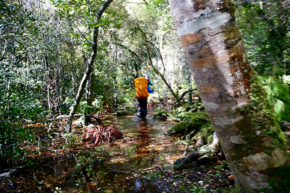 I barely wake through the evening and don’t hear the male and female kiwis that everyone else is talking about. Both sexes make raucous calls, but the female is especially disruptive, as we heard when we camped under our Rimu. Their combined cacophony had most of the group awake at 0600. As planned we were waiting for the other groups to leave before we fully stirred. The family of five have to be at North Arm Hut by 3.15pm for a boat pick up. We are dubious about that deadline. “How on earth are they going to do that” we all wonder. The young couple is off for North Arm as well. They finally head out at 0700 and we get ourselves ready. We are fed and watered and good to go by 0830. We hit the track at 0850 after crossing the bridge and posing for photos at the start of the track. The rain starts as we wait to cross (one at a time) the very swollen Freshwater Creek but based on the long term weather forecast and the charts I have brought with me I am confident that the weather will lift. It can be hard to remain convinced of your reasoning as the rain soaks you.

As it transpires the morning is a cycle of blowing wet and breaking sun, though to start with its more water than light. We traverse a spine of sand covered in manuka brushwood, and the slight elevation allows us to get a good view of the topography we covered last night as well as a view of where we are aiming for today. This delta across which we are pegging is covered in grass, and low shrubs and we can see to the horizon in every direction. The track is good going after the madness of the night walk but I am too enthused too early and it’s not long before the spine along which we are walking peters out and we find ourselves up to our shins in grassy pools of water. It’s a very short time before the boots are full of water again. We are confronted by channels that cannot be stepped over. For me they are thigh deep, for others even deeper so some get carried over the deepest of these water courses that cut through the grass and peat. In some places we clearly cross on grass mats, and there is an uneasy feeling that underneath ones feet is much deeper water to be plumbed. We slosh through four kilometres of water and on occasions samples of mud, up to our knees more often than not. Then the track lifts again onto a sandy, manuka covered ridge and we are ‘feet dry’ for a short period. After weaving our way through this delta of the Freshwater Creek, with the creek proper out of sight on our left, we arrive at the far side and are confronted by a deep flowing river. A bridge is marked on the map but so too for our last major crossing, so as I approach this river I prepare myself for another creative crossing attempt. But to my surprise and relief a small suspension bridge is waiting for us. We cross over and move through a close wood of moss and ferns, through which the sun dapples its light and sparkles off the river as it vanishes into the forest. It’s a gorgeous piece of walking and even though its muddy underfoot I am distracted by the vast variety of vegetation. I know almost none of it which is a shame but that takes away nothing from its beauty. We move briefly onto some high ground and out of the swampy condition under foot and then back to undertake a loop through a swamp which is actually marked as such on the map. All of our swamp conditions so far have not been marked as anything other than ‘normal’ terrain. Which means of course that, even though its marked as swamp, it is no different to any other sections of this walk that have been under water. The only difference is that in this section we get to walk on a board walk for most of the distance. The only trouble is the boardwalk has sunk out of sight and is at best ankle deep below us, at worst knee deep. Perfectly useless.

At the half way mark on this swamp there is a sign. A wooden sign pointing to Fred’s Camp/Freshwater. Why it’s there is anybody’s guess. We have noted (often) how the occasional sign would help when the track is so poorly evident. But here is a sign that points to nowhere helpful on a section of track that is reasonably clear. There is humour in there somewhere. But of note is the carcass of a rat. Half a rat. The hindquarters in fact. It’s the third carcass we have seen severed so cleanly. We wonder that some animal could do this. An owl? Falcon? I would be surprised. And if an animal why take the front half and leave the back half? Three of them. Bizarre.

On the next piece of high ground we stop and brew up for lunch. We enjoy a cup of hot soup. The high ground, which required a steep little climb up a bank, was short lived and we are back to negotiating bog for another two hours. But high ground is no guarantee that we will have dry feet as even the high ground sports boggy patches. Those who track this walk with GPS plot another 8km of diverted walking around these bogs on top of the 10km track. Those bogs cost us time and energy. 10km takes us more than 7 hours of scrambling and picking our way around them, or even through them. We do better than the 200-300/hour of the other night, but it is still a comparatively slow walk.

The high ground eventually remains high ground and we climb slowly into beech and other gorgeous timber. Its familiar to me and I am transported back 40 years. I feel as well as know that I have been here before, and remember sections of the track and terrain from 1976. The sun sparkles through the canopy on a regular basis and the ferns and moss radiate shades of green I have clearly forgotten about. The eye is constantly drawn to a bright green that stands out from the others. But Kavitha and I are forever stopping to marvel at the vegetation and at the way ferns seem to grow from any platform – horizontal, vertical, inverted, it matters not. They seem to find their feet everywhere.

The timber through this latter part of the track is deceptively dense. Not so thick that you cannot negotiate through it but thick enough to muffle voices and have our fellows quickly vanish if and when we pause to comment or admire. It does not matter that they are carrying or wearing brightly coloured gear. They are silently swallowed by the bush and none might know their presence moments after their passing. Of course few are really looking at what is around them when they are so focused on their feet. So they move off quite quickly. It only takes thirty seconds here, a minute or two there and soon we are truly tail end Charlie’s with the wilderness to ourselves.

Clear streams tumble out of the contour lines on the map even though no streams are marked. But by now I have learned that the map is a very rough guide only. Very rough. Even the track route is not accurately marked as we approach Freshwater and connect with the Rocky Mountain Track. But I have at least a reasonable fix on a couple of points today, including our lunch stop and Duck Creek, so for most of the day I have a good idea of where we are and how far we still have to walk. Duck Creek is a clearly defined culvert into which we had to climb, traverse and climb out of. Appropriate, given its name, that some took a ducking in the thing. Its gravel bottom is a nice change to the bogs which have dogged us, though it does have a couple of muddy tributaries which are not marked. Ducklings.

We climb over, or climb under a tree growing sideways out of a steep mossy bank. Behind it I can see the well defined, man made straight lines of steps rising above us and vanishing into the bush. They prove to be the fifty or so steps that lead up to the latrine. Or given its altitude it should be a throne. Through the bush just below I espy the lines of a hut. Freds Camp at last. Behind it the silver shine of the ocean of Patersons Inlet. We step down with care and into a chill breeze we had not felt in the bush.

It’s good to drop the pack but the tide is in and I’m keen to try and get a line in the water. I have brought along a handline but cut some into sections to create three lines. But before we go down to the jetty we brew up and have a hot drink. By the time I am at the jetty I am frustrated by the lack of bait. We tried some ham but the fish suck that off the hooks in a blink. Do fish blink? No. But its fast.
Later in the evening we walk up the beach that seemed to appear out of nowhere very quickly, such was the movement of the tide. It’s an opportunity to poke around a small island in the hope of finding oysters. There are none. However there are plenty of mussels (which we later use as bait) and we fill a couple of pots with more than we can possibly eat. We boil them up for supper and introduce many of the group to these delicacies. They are sweet and fresh and a pleasure to eat. Hundreds of thousands of them at the front door, if not millions, all filtering pristine water.

We are all in bed by 10pm. The hut is way too hot and it takes a while for me to drop off given the temperature, the wound on my toe and my reintroduction to the curse of the sandfly. You don’t notice their bite but some time later those bites start to itch like nothing else that has ever bitten you. While on the jetty those beasts found my bare feet which are now on fire.

Next Entry – and Final (8) Three Butterfish