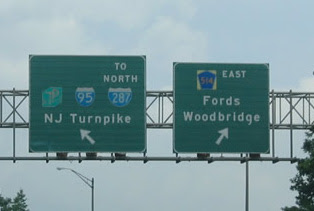 I am sitting on the edge of an oval overlooking the . The buildings of are behind me, while down the road and appropriately out of sight and sound is the tawdry little roadside hotel I signed into earlier this afternoon. There was precious little accommodation around the area given an Army football match was on and everyone seemed to be up here for that. With only one side of the wall framework actually lined and the studs and lining from the neighboring room’s wall painted a bright enamel blue I think it is easily the worst hotel room I have ever set my eyes on. I can’t complain when I am paying $22 although the loud and graphic sex that started up through that single wall lining has forced me out of the room to drive up here and have a look around. Hopefully the young Army stud will be done in a few minutes and we will all get some sleep. She did not sound too receptive (“don’t you do that to me!”) so it might all be over one way or another very shortly.

The day started out simply enough. I drove down to the golf course at McGuire where a bunch of enthusiastic golfers were charging around on golf carts through the fog and trying to have a serious accident. As the fog burned off the carts slowed down – probably because it was now easier to see which senior officers were being the most childish. After a quick breakfast there I got on the road. My plan was to drive around and arrive at without having endured driving through that city. I can have that adventure some other time. The plan remained intact for most of the day. I managed to stick to the back roads and wound my way through some picturesque country. It is pumpkin season and I have never seen pumpkins the colour and size of these. But people seem to collect them for the sake of collecting them. Houses are covered in them. They are stacked up around mail boxes. Piled on verandas. Stacked along sidewalks. None are cut for Halloween as I might expect. Just stacked everywhere. Very odd. But very colourful. It added some drama to the drive.

I wound through a series of single lane roads and passed through very small towns, just taking in the sights and not really paying too much attention to where I was going. It was a nice way to drive. Suddenly, without any warning it seemed, I was on the New Jersey Turnpike and with more cars in my view than I have ever seen in one place. I quickly turned into a petrol station located in the middle of 16 lanes of traffic pouring in and out of , that town now being very visible on the horizon. I took a slow check of the map and got my bearings. And wandered up to buy some lunch from a fast food place but the queue deterred me and I bought a bag of apples off the back of a truck instead.

As I took the apples back to the car a woman pulled up in one of those excessively large cars loved to build in the 1970s. Square edged, wallowing suspension. A horrible mud brown colour. But clean and well kept. It pulled up beside me and a middle aged woman staggered out of the car and leaned on the bonnet. She gasped at me that she thought she was having a heart attack. I asked if she was sure. Her response was along the lines “Don’t be stupid boy, I have had one before and I know what it feels like”. Fair enough. I asked her if she had medicine. She said she had some and that she had just taken it. I then offered to call an ambulance. She shook her head. “No, I just need to get home”.

In one of those surreal moments in this trip she then named a small crossroads of a town in and asked me how to get there. Her pain had confused her and she claimed she was momentarily lost. Here I am from the other side of the world and she asks directions to her house. What chance I would know? Ironically I had just driven through that place about 30 minutes before. How about that? So not only was I able to give explicit instructions but was able to draw her a map and highlight the turns. I watched her car drive off up the ramp in a rather hesitant way. I hope she made it home. Nothing that ever happens in life is an accident is it?!

I threw the apples in the bin. They were terrible.

And to cap the day off – at least until I was driven out of my room (sorry “den”) by the sound of rutting army animals – I was picked up by the telephone operator. I had rung through to where I hope to stay tomorrow night. The operator, based in , connected me but before my call was finished she cut back in and asked what I was doing for the evening. She finished her shift at 11pm tonight and wanted to go out on the town tonight. On the basis of my accent. Bizarre stuff. I demurred. Told her I was at (was that a mistake?) and that I did not want to drive into the city. She encouraged me to get the train. Persistent. Sounded cute but…!

So here I sit with the silvery bronze and dead still. The sun has gone but the sky is metal grey and highlighting the leaves that are starting to change colour. It is a peaceful scene and there is no one around to disturb the stillness. A bit odd given this is a military academy. Back to the hotel I guess. Hopefully the blue has departed the car park and the rutting is over. I hope that lady made it back to her house.