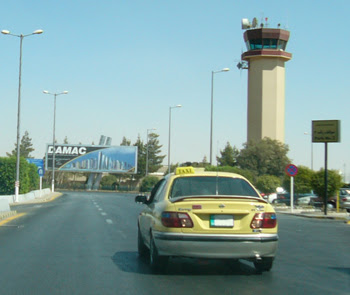 There are moments in life that are just laugh out loud crazy. And in this case slightly alarming. The high speed run from Amman to Queen Alia Airport this afternoon was with a very pleasant and energetic driver who told me he was ten years in the Jordanian Army, retiring as a Captain and for the last ten years he has been Captain of the Taxi. All worked out through broken English and he producing photos of his Army time while we wandered from lane to lane at 120km/h in an old Nissan that was having problems with its transmission at that speed. Both hands off the wheel. Sometimes when conversations falter these drivers put music on. Usually Arabic or sultry Lebanese. But in this case, in mid conversation he popped a tape on and shouted with glee – “back in the Army, scotch (sic) teacher”. At which point martial pipes and drums music blared forth and killed our conversation dead. Now he was just a dangerous driver as he conducted with his right hand and kept time by slapping his knee with his left, occasionally shouting “parade ground” interspersed by a droning hum or a tuneless whistle. As we neared our destination, after marching all over the parade ground in his mind for thirty minutes, the swirl of Amazing Grace came on. He slowed up to tell me how Queen Nor used to love Amazing Grace played by the bagpipes and that once she asked him to make sure it was played at a certain ceremony. The details were lost on me. I told him it was a song about how amazing God’s love is to his people even when we misbehave. He shouted “yes”, turned up the volume and struck his imaginary baton in the air as he hit the gas again. In the end it was only a Hummer at a checkpoint that momentarily quelled the pipes, but as we swung into the terminal Mull of Kintyre was winding up. As he left me kerbside I could hear it blasting from his cab, barely drowning out his tuneless whistle. And his baton was still waving. I hope he got back in one piece.