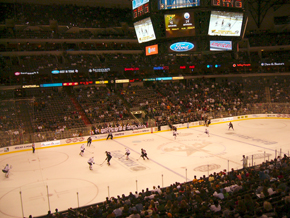 We all admire the hard physical contact sport of ice hockey for its speed and well, hard physical contact. But my inaugural attendance at this game (Dallas Stars against the Oilers (no, I had no idea who they were either – all the way down from Canada)), which I thoroughly enjoyed, was an insight into a spectator culture I believe is unique to this country and unlike anything I experience at home. Let me name the ways.

To start with 20,000 people are seated in the enclosed space of the American Airlines stadium. No standing out in the winter rain at Brookvale Oval waiting for the game to end so you can get home and dry out. Sobering to think these stadiums host a similar number of people.

The entertainment of the crowd is almost equal parts derived from the game itself as from the performances by: the scantily clad girls who regularly glide across the ice and shovel up the loose stuff, a camera crewman who put on an intense two minute rap session, the kids taken for rides on the ice grooming machines, various competitions highlighted through the night and broadcast on the big screens hanging from the ceiling; the remote controlled blimps which sail around the space during intervals and drop gift vouchers into the crowd, the perpetual flashing lights, thundering music and bright screen lit advertising.

Those scantily clad girls – regrettably with breasts more pneumatically inflated and thus protected from falls on the ice than the guys padded up to play the game. I am sure there would be a riot at Brooky Oval if these girls appeared with their impossibly large busts and plunging cleavage, zinging all over the rink on their skates in all manner of provocative poses – but apart from the occasional pimple afflicted young lad trying to take a photo with his hundred dollar special from too far away they seemed to garner little attention.

The central position of the big screens and the cuing that was provided to the whole crowd via that cluster of light and sound – it is a powerful influence alright. The game, a little less than grid iron, seemed to be timed to allow for as much media exposure as possible.

You think you have seen placement advertising!? Have a look at this place? Dozens and dozens of companies positioning themselves in bright lights and neon, LED and plasma screen brightness.

Referees ignore the punch ups and argy bargy that happens even when the puck is on the other side of the rink. That argy bargy is forgotten by the players as soon as it is over. I watched guys pair off, spar and then get back into the game – try that on the rugby field and everybody would be involved in a good old punch up and a number of them sin binned afterwards. Not so this game – a bit of slap and tickle is just part of the fabric.And everyone enjoys it – cheering and encouraging the confrontation.

All that biffo – and it is still a family game! Kids (babies and toddlers, parents, women, teenagers, grandparents. Some parents had their young kids in the front row – potentially traumatic stuff when these players hit the transparent walls at a gazillion miles an hour! But it was hard to pinpoint a specific demographic that supported their team  – seems that this game draws an extremely wide cross section from the community.

A near cousin of the boys at the state fair was wandering around in his suspenders trying to sell “cold beer” at the top of his voice. As best I could tell there is no limit on alcohol served here.

It is an ice rink so the place is cool! Duh. So if you are a parent of a teenage kid, beware them taking a blanket to the game using the pretext “but it’s cold” – the kids sitting in Dad’s box next to us (so OK, I was a guest of someone who had access to such privileges(for which I was most thankful)) threw a blanket over themselves and then proceeded to get cosy. Mum, best to fit them up with thermal underwear before they go to a game – it is damn hard to get into. Or out of.

I could easily be hooked by this sporting culture. And the game. In fact i think I was! Even if the Dallas Stars got oiled by the Canucks from Edmonton 3-2. Next time around Dallas will play for keeps!