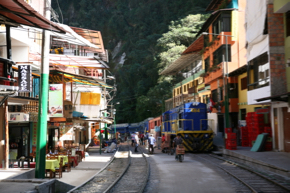 achu Picchu Diary 10 July 2016
Our day has ended with dinner together. Trout again. The group split up today. Many climbed Huayan Picchu (that tall spike which is the familiar backdrop to the Machu Picchu site), but five of us begged off for various reasons. Kavitha and I woke early and got out into the town at 0700 after a brief breakfast and awful coffee downstairs. It was a very cool 7 degrees around town so we settled for a café in the main street until the day warmed up. We had an omelette while we waited, and a very welcome latte.We sat in an empty café, closed the open glass doors against the cold and watched the sun lick colour into the tops of the mountains then slide down the rock into the river at the bottom of the town, then creep across the street to where we sat. Once touched by the sun we ventured outside again, this time to have a non shivering poke around the town of Agua Calientes. There is little to it. A sector that is clearly domestic housing which supports the main industry – the hostelery and hospitality market which dominates this town. There is an air of Namche Bazar about it though this place shows evidence of almost no other industry other than tourism. I am sure it will change but right now there is an air of genuine hospitality, spruikers and others lacking the obnoxious pushiness that you can find across Asia.

The sign says we shouldn’t walk down the track but the locals clearly use it as a thoroughfare which is hardly surprising. In this land of a ‘lot of up and a lot of down’, anything that follows a contour is to be commended. So we wander along in the sun, the smell of fuel oil, grease, bitumen and hot sleeper timber lifting from the ballast and sleepers overpowering anything that might drift in from the jungle around us. We decide to tab down to the station which lies only a kilometre or so out of town. We paused on the platform there on the way in to Agua Calientes though technically it was at this point that the railway ceased to be a pedestrian thoroughfare and trekkers were encouraged to use the new found road instead. But no one seems to mind as we walk through the lower part of town where gas bottles by the dozen are being loaded into railway wagons, while reinforcing rods and bags of cement are being unloaded from others. A school boy, about 14, and his mother drift along behind us, and soon we have moved out of town proper as the track takes us around the bend and out of sight. We stop and admire the flowers and the pair overtake us. Soon they are out of sight around the bend. As they vanish we hear a train horn. In these tightly arraigned granite hills which create a massive echo chamber it’s hard to tell from which direction the sound is coming. So we watch ahead and behind. As we approach the mouth of a tunnel we figure it is coming from in front of us so we wait until the now constantly sounding horn transforms into light and steel and diesel fumes and erupts out of the tunnel mouth beside us. The moment it is past we dive into the tunnel and quickly make our way to the other end. Being stuck in here with a train would not be fatal but it’s tight and would not be pleasant.

The track bends around to the right and as it does so it reveals to us through the tree canopy the ridgeline of Machu Picchu, but also a host of other terraces further down the hill. Some guess that the Machu Picchu site is only 75% excavated and some Inca Trails in the area have only been discovered in the last five years. It’s intriguing to walk around the boundaries of the site and to see through the undergrowth moss covered stone walls. Who knows what else is hidden in these forests?   We quickly shuttle through the second tunnel, make it to the station – it is deserted save for a man painting a wall and a second washing a bus called “Bruce” – and pick our way down to the bridge which marks the beginning of the zig zag climb to the Machu Picchu site. We take tea and soft drink and enjoy the sound of the river and the relative solitude. But we also decide that we should spend the afternoon back up on the ridge, but this time to walk back up the Inca Trail to the Sun Gate, a rather strategic point high above Machu Picchu itself and which would have provided some security against hostile traffic along that trail.

By the time we get back up there the worst of the crowds have dissipated and by the time we have returned from the Sun Gate the place is quiet, even serene. Visitors are lying on the grass terraces and appreciating the place rather than rushing about with their selfie sticks. We enjoy the soft afternoon light and the shadows across the stone which throws the former residences into relief. We snacked while up at the Sun Gate, accompanied by a stray dog, and left there just as a large group of noisy American teens arrived. So our departure was good timing. We attempted the walk around to the so called Inca Bridge but the exposure (drop off into space) in a couple of places deterred me.

We took the bus back to Agua Calientes and took coffee in a French café before returning to the hostel. PG coordinated dinner tonight and we all turned up though some cut it short – not everyone is feeling 100%. Indeed, many spent the afternoon sleeping. It seems some are worn out. But their humour remains. We have a respectable start tomorrow but I have been warned about not being at the train station on time. So I have everyone aiming to be out of the hostel by 0800.