In Defence of Private Contactors 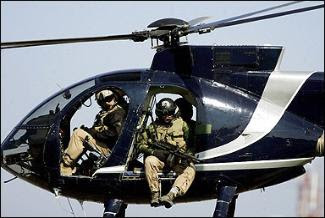 Like most I was appalled by the videos on YouTube showing the cavalier actions by Blackwater contractors engaging “targets” without any apparent rules of engagement which might have gone some way to determining if the vehicles bearing down on them on the highway were in fact a threat or not. I am not sure if there are any documented instances of there being a clearly identified threat – citizens in a hurry to make a doctors appointment or in some similar innocent scenario are gunned down from unmarked cars if they have the misfortune to say, try and overtake an unmarked Blackwater vehicle. I was in Baghdad when the Blackwater teams hammered 17 citizens when they thought they were coming under fire. I am the first to appreciate how that impression can come about but for Blackwater this was only one of many incidents and the Iraqi’s have clearly had enough. I read today in the Washington Post that the FBI is having a hard look at the incident while the US DoD and State slug it out over the merits or otherwise of using companies like Blackwater.
Fortunately the sunglassed, bandanna wearing Blackwater cowboys (the cowboy sobriquet also applies to those who fly these helicopters shown here) are not the whole story. I spent my time with a contracting company which provided not only security services but is intimately involved in the reconstruction efforts in Iraq. Their company operations are predominantly staffed by Iraqi nationals, they live and operate outside the International Zone, are committed to a genuine “hearts and minds” effort with all they deal with and are as integrated into the local scene as they can possibly be. I watched them deal with Iraq civil servants and was intrigued to see how they engaged and interacted with them, treated them as they would like to be treated themselves, were deferential and respectful. It is a far cry from the shoot first, ask questions later which damns Blackwater and their ilk.
Use the contractors by all means (they allow the troops to focus on what the troops need to do) but the Iraq government could do worse than filter out those who have an interest in their contract dollars over and above their interests in the rebuilding of this community. Those security contractors who have a philanthropic and compassionate agenda within their business goals do exist. (And no, I am not employed by one, just in case you thought this was a self serving plug).

I am Bulletproof Until the Lord Determines Otherwise
August 1, 2008