In the Footsteps of Edmund Hillary 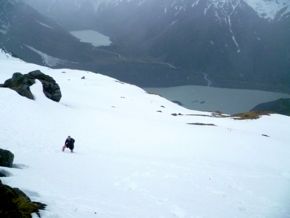 There has to be a better title than that but that pretty much sums it up.  Sir Ed allegedly got the climbing bug when he climbed up to the Mueller Hut located in the Mount Cook National Park – or whatever it was then. So Steve and I thought we would have a crack at doing that as well today. After all, if you have mad notions of climbing Everest why not start where he started? We slipped away as early as we could in order to beat the weather forecast which said it was supposed rain later in the afternoon. The rain didn’t check the internet as we did and shortly after we set off up an impossibly steep spur the rain set in. Not enough to deter us. He hit the Three Tarns (three small lakes, iced over) in quick order and found ourselves not only about half way up but just short of the snow line. But by now the rain was not just a light threat but had swept in, obliterating the view up the Hooker Valley altogether, including that of Mount Cook and the very magnificent Mt Sefton which every now and then let out a crack and roar and released tons of snow down onto the Mueller Glacier.  We felt pretty good even though our clothes were soaked and pressed on up into the snow.  Daft really. We made about two hundred metres though it felt a lot further. At this time of the year the snow is very wet and soft and in many sections we sunk up to our knees, sometimes our
waists. Who remembered to bring gloves? Oh, you mean gloves? By the time we reached an outcrop of rock to have a bite to eat my hands couldn’t negotiate the clip to open my fleece jacket from its bag . Ouch. And the wind was now buffeting us. The forecast did say up to 70km winds so the chill factor was a significant variable by now.  Righteo, time to finish lunch, stop being foolish and retreat. After all we were not prepared for this weather at all. Straight off the rock and into waist deep snow, roll over and out and onto the top, stand up, down to knees and do that a few times until you are back on top. Drop back down the 700 metres or so we had just spent the last couple of hours climbing. We thought he might have a look through the Edmund Hillary centre located not far from where we set off. Soaked, bedraggled and having the occasional shiver spasm we looked nothing like the coifed tourists unloading from the buses. Most seemed to try and stay out of our way. Who cares – with hair amess I was channeling Edmund.

(p.s. the real stuff starts tomorrow. This a madcap effort just because we could)