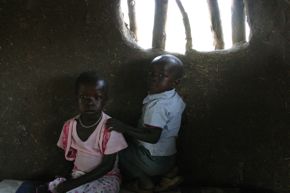 How can I begin to tell you how good today has been. With apologies to the Bard “let me count the ways”. The sun has been gone only twenty minutes or so but that old cliché about darkness falling fast in Africa is true. The arms are click with sweat and mozzie repellant as I sit at a plastic camping table and hope the buzzing of mosquitoes is only just that and not the sound of them landing. I am surrounded by African cats, dark shadows moving around just outside my circle of light, prowling this compound fighting for scraps and having to settle for very slim pickings.

I am consoled by the fact that they are smaller than your average house cat – but equally disappointed they are going to be the only cats I see on this continent on this trip.  The hippo has started up again. And the local boys laugh and mimic its grunting.  They confirm what I have wondered  – they are worried that it is so close. They fear it more than they fear the crocodiles.

We are back after an afternoon’s trip to Melut. That entailed a ride in a small boat kitted up with an outboard. It conked out on the return trip, leaving us stranded and drifting in the middle of the Nile. But I am getting ahead of myself.

To pick up where we left off last – dust shaken from shirt, grab camera, head up the track towards the drums. The church building is a tumbledown affair made of thorn bushes and mud and lined with a mixture of  cow dung and straw. That sounds more base that it really is and the result is actually a nicely smooth, lightly textured (if that makes sense) surface. A horizontal slot has been left in the mud to allow the breeze to blow through. As we approach I see two small faces peering at us through this slot but we loom too large and they drop out of sight, a look of alarm on each of them. Alarm turned to real concern when we ducked in under the eaves and said hello to them.  The only others in the building at the time are a handful of ten year old boys and an older youth, the latter hammering his cowhide drums for all he is worth.

It’s been a long time since anyone made eyes at me in church. Actually, now that I think about I am not sure they ever did. But there is Mary my friend from two days back. She is sitting in the front row all spruced up and shining and grinning at me then hiding behind her hands. Cute as a button is the phrase is it not? She is the one who had fallen in with me and tried to teach me a song, which I am sure from her point of view was a complete disaster. She leads the youth singing, including the song she labored over with me. When they are done I give her a (discreet) thumbs up and she grinned her face off. (As guests we have been asked to sit up the front to one side so we have to be on our best behavior). All those mud covered kids I have seen in the last few days are here perfectly turned out in their Sunday best, not a spot of mud anywhere. Those who have interacted with me over the course of the last few days catch my eye and give me a sly grin – or an outburst of laughter if I wink at them. Then they are scolded and I have to behave – for at least another couple of minutes anyway.

After the service, in which a lot of drumming occurs everyone files out and forms a circle as they go, shaking everyone’s hands. It’s a lovely touch of the community and breaks down any reservations anyone might have about connecting with others, especially strangers like me.  Dang, that hippo is grunting and splashing around only a short distance from here.  I resist the urge to go and look…. Actually no I don’t. I switch off the headlamp and, once eyes get  adjusted go for a wander in the dark. On the river bank there is 25 metres of mudflat to the reeds but in the dark his grunting and snorting and bellowing makes me not go any further.   There is inquisitiveness and there is foolishness – sometimes I have been guilty of not being able to discern between the two. But standing under this thorn tree which is throwing a shadow under this magnificent starlight is worth the foray and I stand and listen to a night as alive with frogs and insects as I have ever heard, perhaps even up there with the jungle of Papua New Guinea.  I am tempted to move to see if I can spot him in the water but I hear his breathing as he surfaces. This is plenty close enough.