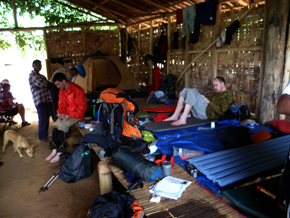 The moon rose last night over the village just as we were thinking of heading to bed. Its brightness startled us and we stood in the silence and stared at the spectacle of massive hardwoods silhouetted against the moonlit sky. Well, at least until we were distracted in turn by the fireflies which skidded through the darkness and impressed us with their luminescence. We stood in silence yet again and caught the wonder of the display.

The roosters in Ioribaiwa were a bold pair but did not wake us too early. We were up at 0530 but that was a good 8-9 hours sleep. Camp was struck very quickly and we started bracing for what is billed as the toughest grind of the track. We were promised ten hours of walking. Now it is a mental exercise as much as anything else. However I did something dumb and which I had learned as a teenager – don’t take your salt tablets on an empty stomach. Breakfast and the malaria medication came straight back up. Not a good start. I redid the medication and retook breakfast but the whole scenario repeated itself. So the day started with no food in the tank and the toughest section of the track in front of me. I got going and focused on getting one foot in front of the other and settling into my own pace which was a lot slower than the usual, especially given the empty stomach. We reached Ofi Creek and took a breather, a swim, some biscuits then we climbed, hauling on and on until we stopped for lunch a couple of hours later. 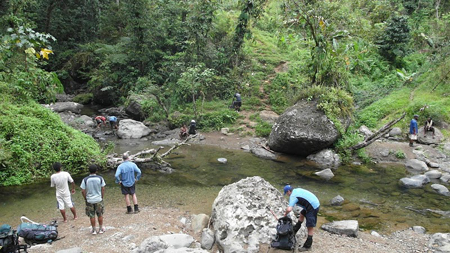 Half way to lunch the first drops of rain started, a slight percussion in the canopy above. A clatter of drops that became a hiss, accompanied by an eventual plop of water on the track as the congregated drops reached all the way down here. After a few minutes there is a strange orchestral percussion of clatter, hiss, plop until the weight of water reaches a point where it is streaming down on us in on continual noise. It continues its steady beat through the lunch break and into the afternoon, pouring on and hammering us all the way into New Nauro village where the rain forced us to stop. Not that we were really grumbling as everything is soaked and this will be a chance to dry some gear.  After getting refuelled at lunch I was feeling ‘back in my straps’ and would have been happy to keep walking to the original planned stop.

At lunch, over the sound of the pouring rain on the thatch Bob, one of the porters started singing. The words suggested something Christian then he started up with the Old Rugged Cross in pidgin. The younger porters followed his lead and sung harmonies in parts. It was a very special interlude.

The rain raises a sheen on the foliage. Dead leaves flick and twist at your feet as heavy drops strike them. They catch my eye and make me wonder for a split second if they are leeches. They are not although we find our first green leech looping through the dead leaves of the track today. Ruby red ferns line the track, orange fungus catch our eye and the occasional flower stands out from the green foliage. Tree creepers and wrens sing a constant chatter in the background and unseen doves call. Alan stopped me at one strange call and excitedly tells me this is a Bird of Paradise. It is close but up in the tree line. Three of us search for him but cannot spot him. He keeps calling and teasing us but we have to return to the track and keep going.

We were privy today to numerous trenches and defensive positions, both Australian and Japanese. We stop on the ascent to look over the point where the Japanese had propped their artillery to shoot at the Australian positions on Imita Ridge. On the subsequent descent we can see the Australian pits dug during the retreat from Kokoda. It’s an interesting and sobering look at what the Australians had to do to fight the Japanese. The remarkable thing here is that there is a long run back up a very steep ridge to the next supporting defensive line.

The rain streams down and turns the track into a stream so we take extreme care with where we place our feet. The air force group had overtaken us this morning also called it quits at New Nauro. We arrived in thundering rain. It’s a well-established place with plastic water tanks, a new modern looking school house and some huts with corrugated iron. We see their gardens before we see the village. It’s a welcome sight. But I think the rooster followed us – he is now in our hut where we are propped and trying to dry out. 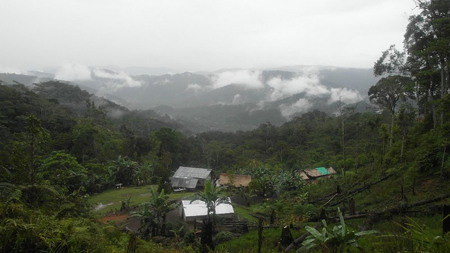 The hut is a thatched affair, long house style. It is divided by a single walkway and on either side are two broad benches raised off the ground about 45cm and covered in slats. Some of the team get their tents out and set them up on the benches, the rest of us decide to take our chances with the insects. The rain leaks through and dampens the bottom of my sleeping bag while the occasional dropping plop of water hits my head and forces me to turn over. We are all pretty much ready for bed after a hard day. Diaries are caught up and a few tall tales and true are shared as the evening quietens down. Soon everyone retreats and the lights go out. The rain has finally stopped and the jungle seems doubly alive for its soaking, the insect orchestra working overtime. I assume it is owls I can hear, the only bird sound that seems to be coming out of the dark.

We sleep early but wake early. Without any watch the night can be confusing. I can be asleep by 8pm and wake much later and hear the porters moving around in the hut next door, pots and pans clattering and the ubiquitous rooster going off. But I discover over breakfast the next morning that any of these noises could have indicated midnight, 0300, or 0430. I can’t figure out why the porters were bashing pots and pans at any of those hours: they never seemed to settle tonight.  Have the spirits which stalk this jungle got them rattled in this place?