Don’t take your malaria tablets before eating!  Not the salt tablets after all. Anyway, got the stomach purged in time to get breakfast in and staying down. Attempting any work up here on an empty stomach as I tried the other day would be a mistake. It was a mistake. Just prior to retiring last night I walked out of the campsite and back up the track 50 metres or so. The darkness inside this jungle was absolute. How the soldiers moved through here against each other defies imagination. I can’t see my hand in front of me let alone a track, or someone hiding in ambush. These days night vision goggles make working at night common place but in 1942 there was a Mark 1 Eyeball and that was about it.

It’s an early breakfast. The sin sinks into our clearing, sliding down the lichen stained trunks but not quite reaching us before Lee calls “one minute” with the relish of a fresh parade ground sergeant rounding on his hung-over troops. He has no watch our Mr Lee so his “one minute” could be any period of time at all. Better huck the pack on and get ready because the next call from Lee will be “let’s rock and roll” and we will be doing that whether we are ready or not.

We have now eased our way down into Templetons Crossing where the thunder of the river drowns out our conversation. The river thrashes over large granite boulders and invites some to its cold embrace. The rest of us are focused on getting fed. The descent was slippery and we came down out of the black mud and returned to the greasy yellow orange clay that is treacherous in the extreme, but especially after a shower of rain as we discovered earlier in the trek. We are walking through the middle of a fighting Japanese retreat and we find at a water break the remains of a Japanese machine gun pit – after a bit of sighting up the track, a quick recce and a forage through the bush. I figure there are three or four more sites like this as we walk through, all ideal ambush situations and likely to yield old foxholes and diggings if we are able to stop for a few minutes. Regrettably we don’t have that luxury.

When we started at Owers we were struck by the strange aggregate boulders, made up of thousands of small stones but bound together by something we knew not. It was a topic of some intrigue as we got going. But since Menari there has been none of that and more mica and feldspar underfoot. The granite in the rivers, the alluvial creek beds and this mica are all pointers to this country’s gold heritage. The only clue I have not seen to complete the picture is black sand but I have barely had a chance to scratch myself let alone fossick for gold. (At one creek I was tempted to get the plastic plate out and try a bit of panning in a deep and slow bend in the creek – but we moved on too quickly). Kokoda was a gold yielding area last century and Alan tells us there is plenty of gold still to be found in this country.

We respite at Templetons. The gold here is lunch. The porters laugh and chat among themselves. Their singing last night might have gone on long after we fell asleep since they were uncharacteristically slow to get started this morning and had their heads in their hands at the first walking stop. Maybe the betel bites them after all. It sure bit me.

Our first leeches in any number this morning. Three attempted to hitch a ride but they got ditched pretty quickly. There may well be some which have successfully attached but I won’t go looking until we stop tonight. Black butterflies with iridescent green and purple markings collect in the gravel on the edge of the creek, delicate silk against a thundering backdrop. They allow themselves to be caught but are not so cooperative when it comes to being photographed. We manage a picture of sorts but the gripping hand conceals the true delicate nature of these remarkable insects.

It is a pleasant spot. We could stay here. There are no clouds in the sky and we see the charter aircraft shuttle down the valley to Kokoda, below ridge height, an unwelcome reminder that in a few days we will be in one of them and this adventure will be over. No thoughts of that right now, just make the most of what is left.

The creek banks are lousy with choko and the porters collect a heap of tendrils for lunch, though I notice a few kilos of it carefully stashed away in someone’s pack. They boil them up like spinach. 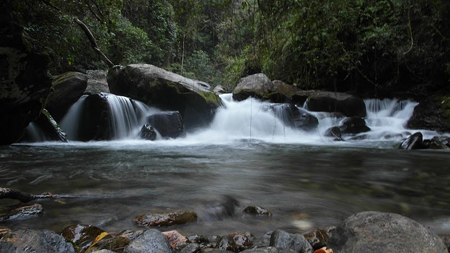 We are now discovering that is it difficult remembering the different sections of the track, which is ironic because the real tough sections you swear, as you traverse them, you will never forget til the day you die. Already we are blurring the days together, the pain forgotten and a glance over the map sparking the exclamation “did we really do that?” We passed a group from Shoalhaven going the other way. Two days in and they were doing it tough. I concede there are good arguments for doing the walk in either direction but for me the psychology of walking in the direction of the victorious Australians is a more potent tonic than following their withdrawal. Either way, we are constantly reminded of the presence of these men as we pass weapon pit after weapons pit as we negotiate the long climb down to Eora (E-oar-ah) Creek.   The day has remained clear and blue and the sun shines through trees as straight and as large as we have ever seen them. We drop into a canyon of timber and green and lichen and fern and vines, bamboo, choko, unnamed green plants and green boulders over which the hushing Eora Creek sings and pulses.

As we climbed down the ridge to Eora Creek  some of the porters had fallen back and the whole team had become strung out as we made our own way at our own pace. A middle aged female trekker going the other way stopped with Chris and I and exclaimed in amazement at the music she could hear coming from up the track. The boys, still unseen behind us,  were singing in at least three parts, a beautiful instrument of song that drifting down through the jungle over us all. We agreed with her but made out this was a terrible way to treat trekkers and we had been putting up with the noise all week. I think she was German – I hope she saw our humour.  Seeing her look of wonder at hearing “the music” is one of those treasured moments I will store away. It truly and quite literally stopped her in her tracks.

Tents are up in a rather average camping spot then as soon as I can I head down to where the porters are bathing in order to take my own bath. Why there? The porters are clued on to the fact that a frigid bath (the water is freezing) is best followed by lying on warm rocks and in this deep canyon with little direct sunlight the rocks are still hot. Frigid it is and the body is soon numb. But the tan is soon soaped away though the scratches and cuts only seem to be accentuated all the more. 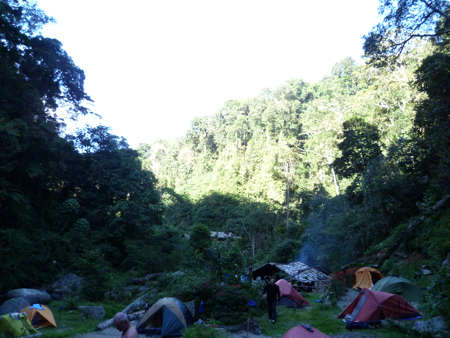 The canyon is impressive. It reaches up on either side about 150’. The ground and forest darkens around us but the sky is still blue above us and white cumulus start to boil up. I wonder if we will cop any rain tonight. We have had a clear few days and I am relieved there was not the deluge we had on the first couple of days.

I think our camp spot, or rather the tent site is quite okay this evening – the sponginess of the undergrowth will contribute to the comfort of the sleep. We are all bemused at how early we all retire.  Comments about weariness surface around dinner time and by the close of dinner the first team members are heading to bed. It has just gone 8pm and only three are left standing at the fire, and only then because they are drying clothes washed earlier in Eora Creek.

We watched the porters scurry about as the sun sank, gathering arms of bracken and fern for their bedding. Oddly enough the track wends its way directly through their shelter. Any trekkers (unlikely) to hit us before we depart will have to make their way through their bedroom. Some of the porters come from a village near here – Alola. They will be pleased to be near home and we of course are very interested in seeing where they came from. Time to put up the pen. The creek sounds like a continual rolling heavy surf (but without the wind) and that is usually more than enough to lull me to sleep.