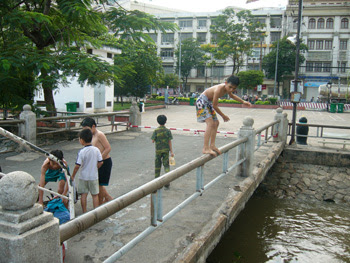 If you stop for very long [in down town Ho Chi Minh City(formerly Saigon)] – say two or three minutes – chances are good that you will be tapped on the shoulder by someone wanting to practise their English. This has now happened on the steps of the Opera House, on the banks of the Saigon River and of course up the back streets with MK and her family. In this instance the lesson was initiated by Nyugan Van Chung who arrived with a dictionary in hand. My initial suspicioun was that he wanted to sell me a dictionary. That proved not to be the case. Rather he came armed with numerous pieces of paper covered in lists of words which he was trying to rehearse.
On a steamy morning, with the drain stink of the Saigon River in our noses (though boys being boys were happily leaping into its swirling current, trying to catch plastic bottles and ear and throat infections) , in the shade of trees that drop goodness only knows what, we explored words starting with “ex”, which are especially tough for these people. And of course we made a whole lot of conversation, with things around us being the catalyst for the same. The Russian craft which serve as ferries became the subject of a geography lesson hence the hand drawn map here of Asia and Russia. And we had to take care of China at the same time since he had managed to confuse the country with porcelain. Sometimes a dictionary is only a hindrance.
But all in all we made good progress, practising sibilant and glottal sounds while at the same time doing our little bit for good neighbourly relations. Interestingly enough he volunteered that he asks numerous people to practise like this but said they were afraid to talk to him. He was not sure why that was, but we explored some possibilities – from Caucasians not necessarily being able to speak English through to a lack of confidence in themselves to teach. He is a very slight and unassuming fellow, not intimidating in any way and very plainly though neatly dressed. He was very proud of his very battered briefcase/satchel. I got a sense that he was sleeping in doorways.
He is down from Hanoi, looking for work. Born in June 1976, he told me he was the third child, second son, with no girlfriend. I wonder if he is one of those third child pieces of flotsam that get no support and somehow have to make it on their own. There was no evidence of any job. He told me he came down here to the river every day to find people he could practise his English with. I am glad I accepted his offer. It was a morning well spent. Even if he was part of a security detail. Under all that patter, a part of me strongly suspected he was. Though I resisted the urge to test him and try and trip him up on his language exercises. Heck, I am here on a holiday. Relax and go with the flow. I did, and the conversation was doubly sweet for that.

Soviet Tanks and Japanese Toyotas
May 4, 2007