Leaving Lima – and a bit of my heart 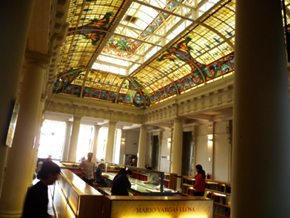 (Diary 15 Nov 2010) I am sure they sound erudite and clever to each other but the two German ladies , otherwise quite well presented, are through half a bottle of white and have knocked off half a bottle of duty free Drambuie.  I am surprised they are still sitting upright. It is one form of therapy I guess as I sit here waiting all day (Buenos Aires) for a delayed QANTAS flight. There are a lot of “sh” sounds in German and right now this pair are blurring together in to a rolling, excited “shhhhhh” If they are on my flight it will be along haul alright, especially if all those drugs don’t knock them out. It’s my birthday so the wish I make for myself is one of quiet travel back across the Pacific.I finished up in Lima checking out at midday but with ten hours to kill before we flew out to Argentina. So I walked up to the Maranatha Church where Herbert used to worship. It took about an hour and was a pleasant stroll through tidy suburbs and garden streets.  The day was brilliant and clear, perhaps the first such day I have had for the whole fortnight. There have been sunny days but this light sparkling over us today has struggled through a “glass darkly” the last two weeks with the cloud never really burning off each day.

It is Sunday and the Plazas are full of people and traffic. The tourista is evident, mainly by his presence in very large buses with tinted windows that do a loop of each Plaza and then blast off to points unknown but no doubt interesting. The Peruvian tourist in his own capital city is another animal altogether, not altogether different to his culinary cousin, the guinea pig: a little bit portly through ill fitting tee shirts, waddling around the streets sucking icecream and in a constant state of high pitched chat.

I find a different type of animal in the literature exhibition being held behind the President’s palace. It turns out to be in the former railway station, beautifully restored and from which tourist trains will still take you to Huancayo.  There is no civil rail network as such, everything rail being given over to ore. The literature exhibition has a few guests but the bulk of the chatting guinea pigs are outside in the Plaza eating their ice-cream and things cooked in boiling oil, listening to a chap singing and doing a lot of finger clicking, foot stamping and whistling – often all at the same time. The old girls in their bowler hats think he is terrific. (Speaking of old girls, those two Germans sitting in this cafe with me have suddenly slowed down – that Drambuie must have kicked in). What that means in this exhibition is that as the oftimes sole attendee I am pounced on by every gallery keeper and regaled with something in rapid fire Spanish, no doubt very learned and informative. They are completely mystified why a non Spanish speaker would want to walk through a place like this and they abruptly walk off when I demonstrate my profound ignorance. Clearly I am not the right breed of guinea pig.

With the exception of one young chap who declares, hand on heart no less, and eyes rolled to the ceiling twenty feet above us, that he would lurrrrve to go to Seed- knee. You get the idea. Antonio was actually a very engaging fellow and since he was not being knocked down in the rush in his little corner of the gallery he practised some English. I learned some polite Spanish words and we spoke about llamas for good measure since one wandered past the window grazing the hedge. I hope I did not look surprised.  Antonio was a little gobsmacked I had walked in from San Isirido, an hour and a half away. He told me he was hard pressed climbing the stairs at the end of the day. I believed the waddling guinea pig in him.

But is was a good way to wrap up the visit and I left him after an entertaining twenty minutes or so and made my way up to Plaza San Martin where previously I had wondered how it was that the statue was not covered in pigeon poo. It dawned on me now that the secret of the non besmirched General was simple. Silly me. He was a General second, politician and political liberator first. I should have known nothing a pigeon was going to deposit on him was going to stick.

And so to the Lima airport. I have an blog entry to add to my global tales of taxi travels – my conversation with a Peruvian taxi driver. I fancy it would be a good creative writing exercise. “Describe in ten words or less your trip to Lima. You cannot use “Si” more than once. And you cannot substitute drawings and sketches for words.” That would stump me completely. I drag through the airport in the usual tedious way and am eventually spat into my aluminium tube where I get my first birthday wish precisely as I asked: the closest child is exactly five seats away. But he could have been kicking me from behind for all I cared as I was asleep straight away for the five hour night flight to Argentina. Happy birthday boyo.

The German ladies  have collapsed into each others arms with laughter, finding something nearby highly amusing. It’s probably the salt shaker. I whisper that second birthday wish to myself again.