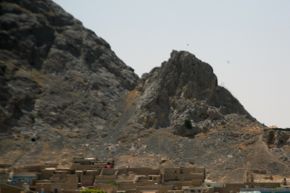 conveniently announce the 12 May will mark their summer offensive kick off. Other reports and rumours underscore that date with hints of a big and signatory attack on Kabul, possibly the airport. Great. Goodonya. Thanks. I am flying out of Kabul on the 12th. I dropped off to sleep last night testing what I knew about the security situation, reviewing what I have in my overnight bag in case things get weird and in the end drop off to sleep feeling pretty sanguine about the trip to Kandahar.

As we approach the airport the traffic turns into a carpark after a clear run through town. It should be clear since it is 0600. We get out of our car and farewell Ali our very phlegmatic (the only way to be in this place) driver and decide to walk the gauntlet of security check points. It is a good choice as we leave poor Ali in the mess of vehicles to his own devices. 22 minutes later we are standing in the check-in line having survived both the most serious and intimate of  scrutiny checks as well as the very cursory security scans. Mobile phones should not be in the hands of guards while they are on duty! There was a very good reason to pile out of the car when we did. It was at the front gate of the airport which is the subject of so many reports of planned attacks (that never actually happen) that we had ground to a halt and we figure it best not to hang around there. Even as we bailed out we received an SMS alert telling us two rockets had landed in the area of the airport. We keep walking and by the time we get to the check-in line we hear from ground staff this was true and the flight was likely to be delayed an hour or two. You know you are in Kabul when this attracts not the slightest response from a single person in the hall. Not one.

A fifteen to twenty minute delay was okay by me and soon we were airborne and hammering south over ruptured rock now shed of its white winter skin and revealing the dramatic texture of upheaval and riot, mountains broken into pieces, woven together with the thinnest threads of green among which I can occasionally see a small settlement. Who lives in those fissures and how did they get into those place in the first instance I wonder.

The transition from ruptured rock ridge to sand is reasonably abrupt and we are soon dropping into Kandahar where I am told one in very four people are Talib. The airport is something out of the 1960s but quaint and attractive for all that. We have quite a walk to the front gate but that is OK. It is mid morning and the day is mild and the scent of all those roses around the terminal building hangs on the warm air.

Kandahar is set along a flat and dusty river bed though dragon teeth mountains of rock pierce the alluvial and make striking and raw statements on its outskirts. I am distracted by the roadworks as we travel along in a slow convoy that is led by a mine sweeping military convoy. I think that makes me feel better.  It is hard to know – a faster moving target is harder to hit than the crawling target we currently are. On the other hand the overwhelming threat is the IED. We finally peel away from them and head down town, skirting the ancient city of a seven gated fortress, down streets lined with more eucalypts than I have seen in a long time. It’s a more decrepit city than Kabul but there is evidence of some civic pride and businesses trying to get shaped up. Teams of men risk their lives among the traffic as they paint newly concreted median strips. Slabs of fresh yellow alternate with slabs of glossy black.

By the time we have arrived at our sprawling accommodation (former digs of a drug lord (this is the capital of poppy country after all) the day has warmed up to a bright and glittering thirty degrees. There is little traffic and the city seems slow and coy. But from my roof I can see a busy arterial route with the spines of trucks and semitrailers visible above the rounded mud roofing of this place. Rounded roof? Mud and stone is available here but not timber. You make do with what you have I guess. I take some pictures from the roof but don’t expose myself up there any longer than I have to. Besides up there on the silver tar paper the bright light hurts my eyes.