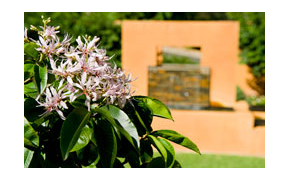 I hope being that familiar so soon is okay. I just wanted to say thanks for the excuse to run up to Palmdale today.  There  is no town centre to speak of but I am sure the couple of women I crept past as they walked their Clydesdales in the shadow of giant Norfolk pines would have it no other way. It was one of those clear blue shiny days Sydney does so well. Brooklyn shone and glistened and there was not a cloud to be seen.

The intuitive analyst in me says your brother is not buried up here. Why would he be, seven hundred kilometres or so from where your parents called home – a number of spots actually, mostly along the Murray River? But I had to check just in case. The oldest of the old cemeteries are gone I am afraid. The Ronkana Cemetary is overgrown and desolate – though someone had been through recently and put some Mothers Day tokens of affection on one site. If there are any sites of your brother’s vintage they are long returned to the scrub. And the larger cemetery was not used until 1970. So something of a blank there. But the day was perfect and the bellbirds were chiming out of the bush at us all with their perfect tones.

I wonder what the story is behind marrying Phyllis so young. 16 years old tells me there is a story there. Possibly even one the family wanted covered up. Or am I being too melodramatic and should I be anticipating something more romantic instead?  I am pleased that you had more than one child though. Initially he was the only one I could find but I see there were another four. Some of their kids lived in Reservoir at the same time I did. How strange that our paths might have crossed so closely, even if only for a short period of time.

That dermatitis that saw you invalided out of the Army must have been viscious. Possibly one picked up when you were in Papua New Guinea? There is a nasty thing called a “florin fungus” or more recently a “dollar fungus” – nice round sores on your legs, caught in the tropics as you run around being barked at by sergeants. Caught a bit of that myself once. But then I guess no one would be too happy about being served by a cook afflicted by dermatitis, vicious or otherwise. It’s not a combination that sits too well with the troops!

Look after yourself. And for goodness sake go and get your heart checked. It’s going to kill you one day.