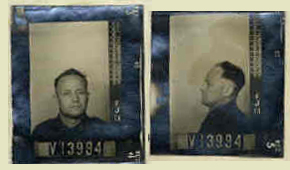 Here you are at last. Funny how a photo makes it all a bit more personal. Just a shame I had to rely on the Army to provide it. I am sure you appreciated the recruits haircut you received just as much as the rest of us did when we received ours. We had a Mr Sayers for maths (how he got the nickname “Spotty” I will never know) and he was in the Army as well. I wonder if you were ever connected.

Your medals rolled around for many years in someone’s toolbox before my brother found them in a second hand store in Holbrook. They have been lying in the bottom of another toolbox for the last 26 years. Sorry about that.Did you lose them? Did the family lose them? Or did you throw them away? Some did when they got back home.

I took them into the medal specialists in the city during the week. They are going to put new ribbon on them and mount them. However they suggested that I wait until I find out if you were entitled to more medals before they put the set together. It was wise advice since I discovered in the back of your jacket that you spent some time in Papua New Guinea in 1944. So there is one more medal headed your way. You would have been entitled to another if you had served another three months. But a medical discharge is a medical discharge and I am sure your wife Phyllis would have been glad to have you back rather than hang about so you could be entitled to another gong. Living in the Ballarat Showgrounds caretakers cottage while you were in uniform must have been a second best existence for her.

I wonder what you thought of your time in the Army. I suspect it was a brief interlude in the scheme of things. Life along the Murray as a kid seems to have been itinerant and tough for your parents. You are named after an infant brother who did not make it past his first birthday and is buried up Rutherglen way while another died at about 5 years old. I wonder why he is buried in Palmdale. It is a long way from home. I am hoping to drop up there over the weekend to see if I can find him.

But you don’t seem to have had it so easy yourself – at least in terms of losing loved ones.You and Phyllis had a single child who passed away in 1963. He would have been about the same age as you are in this photo. Roy was still living with you at the time. What happened?

I see the Army cured you of your cooking career and you found yourself in Melbourne as an aircraft cleaner, living off the end of the runway at Essendon Airport. Your house is long gone (the Ballarat homes are all still there!) and light industry and those big houses Melbourne Italians like to build now fill the space. But the airport is still there. Who did you work for? TAA? Ansett?

But who were you really Charles? The Army record is shot through with numerous instances of being AWOL. That encourages me to think you were something of a ratbag. I surely hope so. I will keep rummaging until I find out.