Meet the Future of Sudan 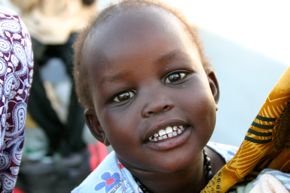 We suggested (an important word) that our boat crew be on the bank at 5.30 for the return trip. To our surprise they chugged to a stop at 5.35. Not so surprising was the fact that we had some extra passengers. You grab whatever lift you can around here. A girl about 18 and a boy about 15. And second girl, also about 18 with her two children, a young baby about 3-4 months and a daughter about 3. The wind has dropped, almost completely and the evening is yellow and warm and calm. We head off against the current with the bow down and a three year olds face peering at me from the safety of her mother’s side. I pull faces and wink but nothing happens in that little brown face. At least to start.

It’s an idyllic ride. We pass a small sailed dhow like craft and then a couple of fishermen in their canoe, their net marked by floaters made of reed. They all wave gently at us or smile. Nothing too demonstrative – that is left to the clutches of small kids on the other side of the river who wave enthusiastically if you so much as look like raising your hand.

The sun is setting into an orange sky when suddenly the engine conks out. No one seems too perturbed by this development including our new passengers. We stop every now and then anyway to allow the helmsman to clear hyacinth weed from around the propeller. But we have been sailing through clear water along the western bank, just prior to cutting across that vast elbow of water referred to earlier. We start drifting back the way we have just come as the helmsman starts messing with the open containers of fuel. We get concerned when the cover comes off the engine and he starts disconnecting fuel lines. Russell and I look in some alarm as he disconnects the fuel filter and starts cleaning it out – over the water. We are not thinking of the environment but about what would happen if he dropped it – straight to the bottom of the Nile and a slow drift back to Melut (and no ability to warn off those large barges). I was also watching the river bank. Paul had just pointed out a couple of channels through the reeds which he said hippos had made between the Nile and surrounding swamps. As that filter got tubbed we drifted slowly towards an opening to one of those channels.

Turns out the problem was dirty fuel, not helped by the fact that the locals will load fuel into any container to hand. Who knows what was previously in the 20 litre drums at our feet. And the fuel lines were pushed all the way to the bottom of the drums so the fuel was being scavenged off the bottom, along with any sediment that might have settled there.

After about twenty minutes or more the lines are finally cleared but the helmsman is feeling the pressure. He revs the engine fit for a Shuttle launch, drops the thing into gear and it dies. He repeats the exercise a few times before Russell finally steps in and under his gentle touch we chug into life and finally head away from those reeds and out across that stretch of water towards home. The helmsman is mightily pleased, I am quietly relieved and the rest of the passengers don’t appear to bat an eyelid. With the exception of one.

It has taken a while but the three year old has thawed out with the help of “peek-a-boo” and any other idiotic games I have played from the back seat. She has a shot at winking her left eye and is raising and lowering her eyebrows in squeals of hilarity. Her too young mother smiles shyly but is unsure about all these shenanigans (I want to tell her she is one of many!) but the three year old is on for everything. She is freely laughing and giggling and is full of light and pleasure. How true it is that we have to step carefully. It is hardly likely I will ever see her again yet it is no accident we share a ride in a boat together for an hour on the Nile. For what purpose I have no idea. Where will she end up? Will she get a decent education? Decent healthcare? Will she have have her own family? Will she and they be raised in this new country of Sudan or in yet another camp in another country on its borders. Or will she never see this, knowing as the previous generation did, only rape and killing and pillage and war? The most we can do in the time we have with them is give them who we are. I guess the question is then begged, how much time do we want to have with them?

Here she is. I have no idea what her name is. But she is lovely and she is the future of Sudan. 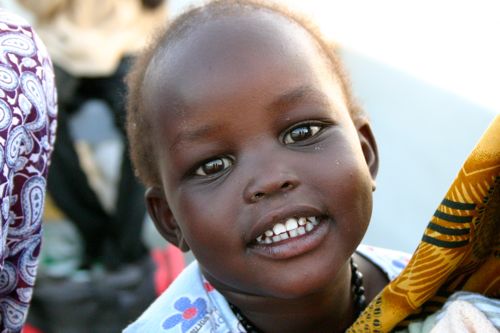