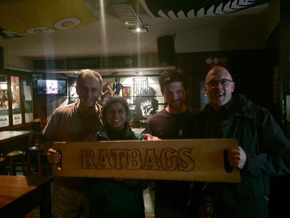 November 11 . It’s a day in which to remember. To remember the fallen alright. Our glorious dead, though glorious only because of what they gave us. I wonder, if they ever are conscious of it, what their spirits make of that. A waste? A gift? Too much focus on glory and not enough on dirt? A death laced with glory and honour or salted with more sordid things? It’s a day to remember the living as well. And the opportunities gifted us over a lifetime that in retrospect has flashed past. Forty years ago this month (I have misplaced my diary of that time so don’t have specific dates. The diary was written in green ink – the only pen I could find I guess. Words as well as sketches. It would be good to unearth it) we walked Stewart Island. It was a formative walk in many respects and the memory remains vivid and full of colour and sound, voices and shouts, sand and moss under my feet. I can taste and feel the place, the intervening forty years notwithstanding.

Dad had lived on the island in the late 1950s. 1959 if I have the story straight. That’s late 1950s. He had trays of 35mm slides of the place which we would occasionally drag out and explore when he wasn’t around, holding up the Kodachrome frames to the light and catching deep greens and impossible blues of a mysterious and exotic place that few New Zealanders ever visited, despite the island being a very conspicuous full stop at the bottom of the NZ exclamation mark. From out of these decks of slides Dad eventually selected three and had them printed on glossy paper, framed and hung in the foyer near the front door. They were a constant insight into something foreign and exotic, for the bush and ferns hinted at rainforest and the golden sand of tropical, far away places. Or such I imagined for I well knew the island sits on a latitude completely divorced from Capricorn. In one of those images there was a driftwood log. In my mind’s eye it was a dragon, only reinforcing the idea of a place I needed to visit but was never ever likely to clap my eyes on.

Midway through 1976 my parents decided to migrate to Australia. That decision and the subsequent dislocation was rapid. I have no idea where the concept originated but somewhere in all the rushing about tidying up loose ends Dad resolved to take us to Stewart Island. We, along with a number of the youth group and its leaders. Sixteen of us in all. I may have the recollection wrong but I have an idea he wanted to share this isolated paradise with us before we migrated. In those days, and with the horizon of a fourteen year old there was a sense that this was a farewell trip.

Farewell it may have been but there was no maudlin sentiment. Rather a strong sense of adventure and exploration. Above all I was going to put sights and smells to those photos in the foyer. Our trip down from Bluff was calm and unusually still, on a clear day. It was non eventful though I am amused when I think back to those of us carrying rifles on the ferry. Rifles slung over shoulders like a light bag, carried with an air of nonchalance, and none paying any attention.  There are deer on the island. Feral. There were hopes back then that we might bag one or two but I had lingering doubts about that. There were too many stories over dinner over the years about how elusive those animals were and how even the locals with all their knowledge and cunning were hard pressed to find deer in the dense bush that blankets the island. We were off the ferry and into the bush quite quickly through we did pause at the head of the track to check gear. And to reallocate food and supplies. Rather than carry individual rations we were carrying food for the whole group. Somehow I ended up with a pack full of flour which weighed a ridiculous weight. Worse, I was using a borrowed A frame pack (“kidney crushers”) with poor strapping. Very quickly on that first day my right arm went numb. Decades later and to this day even the best padding on a pack eventually kills my right arm. Those walking behind me in Nepal in 2012 commented on how my pack often tilted to the left – it’s a practise of having my left shoulder take the worst of the load, zero weight being on the right shoulder as I try and get feeling back, or as I try to avoid losing feeling altogether. It’s a perpetual legacy of Stewart Island I have carried these forty years. For me the island is a hard place to forget, for all sorts of reasons.

So now we bore down the South Island heading to Dunedin. It’s the end of the long white cloud alright as we track above a blur of white that obliterates the view below and smudges out the horizon and throws dazzling white light into the cabin. NZ677 is an Airbus 320 and we connected with it after a heart-stopping ‘lost bag’ moment. My pack came through from Sydney (NZ102) but Kavitha’s pack was nowhere to be seen. We waited at the luggage claim desk of Air NZ but the clerk was clearly high on crack and couldn’t move quickly even if he wanted to. So I drifted back along all the other carousels in case it had found its way to one of these. No such luck but there it was, a lonely pack grinding around on a never ending loop on a carousel that had previously been shut down along with an emphatic “there are no more bags out there’. Kavitha suspects it had fallen off the carousel airside and been noticed at the last second. I think she is right. We had a tight connection to Dunedin so once we retrieved the pack we scampered off to clear immigration We had pre-packed our food for the week and were about to find out whether we had to dump it all or spend a lot of time having it examined. Our bio security officer was a thorough yet congenial chap from Punjab who quizzed us about all our food and gear and checked our boots. He was happy to hear we had no tent. Our conversation then turned to the northwest frontier, Afghanistan and the local populations and their hospitality. My ‘Guns and Coffee, Kandahar’ T-Shirt prompted the chat, after which he waved us through to the Green Lane. (It also helped that we were not carrying any dried meat).

With an eye on the clock we shunted our luggage cart outside only to encounter Dylan who was drifting along eating a bag of cheezels. He had just checked his bag through to Dunedin so we did the same then caught the bus to the domestic terminal and … here we are now dropping through 25,000’ and through the white stuff to what promises to be a walk down memory lane.

We have an afternoon of shuttling to and fro from the airport, signing into our accommodation at Waihola, back to pick up Chris from the airport and then in to Dunedin to get some dinner at an aptly named eatery called “Ratbags” after we discovered no food outlets open in Waihola after 8pm. I should not be surprised. We fell into bed at 11pm full of pizza and wine and not a little surprised to find ourselves finally here.