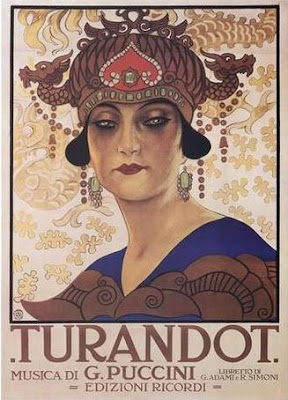 What on earth is the Nessun Dorma? We all associate it with the 1990 World Cup when Pavarotti sang it. But with Paul Potts singing it last week to get our attention I wondered what the story behind it really was. There you go, my Opera roots revealed to be as shallow as those of a stream side willow!

Turns out it is an aria from a Puccini opera titled Turandot. The “Classical Music: The Rough Guide” tells me it is a “disturbing example of Puccini’s affection for violence against women.”

Turandot is an evil Princess. Resident of Peking no less. During legendary times (that is such a cute piece of authorial licence aimed at defusing offence). She announces she will marry the first man who can answer three riddles. Fail the Q&A session and its off with your head. A besotted Calaf, who does not reveal he is a prince, is in the crowd watching the execution of one of the unfortunate quiz contestants. He thinks he is up for the quiz and answers the questions which puts Turandot’s nose out of joint. Calaf is a gentleman, even if a stupid one, and suggests he will submit to execution if Turandot can guess his name by dawn (shades of Rumplestiltskin).

Turandot puts the wheels of government into motion overnight and starts mass executions to tempt someone to give up Calaf’s name. Turns out Calaf has a lady admirer who kills herself rather than give up Calaf’s name. Calaf gives up and confesses not only his name but his love for Turandot, who then falls in love with Calaf. Go figure.

Convinced? No, I am not either really. Nor is my Rough Guide which advises “the sadism of the opera might leave you with a bitter aftertaste”. I think I will stick with travel. Enough sadism in the design and layout of cattle class seats at the back of the plane for me to sate any idle interest I might have in that subject.