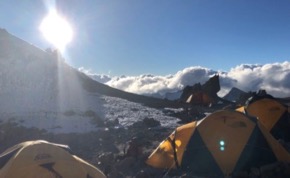 The evening was still and mild when I went out at 0200. Well, as mild as an evening at 5000m can be. In the far, far distance on the horizon, a pale orange light. A high town perhaps in the general direction of Chile. The sky is clear but the recently set moon still lights up the sky over the horizon in the west, so the Milky Way is not as luminous as it usually is. We are now camped so high lightning from a distant, unseen storm lights up the sky. There is no sign of any cloud from horizon to horizon yet the flash reaches us from forever away.

But when I wake (after dawn) the breeze is up and low cloud fills the valleys below us. That’s new. It’s clearly below zero but it’s hard to tell by how much in this dry atmosphere when no ice forms any frost. You can’t say anything like “Oh, we’ve had ten degrees of frost” by looking at the ground. The burning sensation on your skin is a different measure. So too the fact that the Nalgene water bottles in our tent are frozen up. With no breeze the sub zero temperatures are actually very tolerable. But the slightest feather of a breeze cuts you deep and is to be avoided.
Breakfast is at 0900 – tea/coffee, porridge if you want it, and sweet cake. Dried nuts mixed with glazed fruit. The diet is built around getting carbs into us, and fluid. And to varying degrees they are successful. The soups are not always the most palatable dish and can make one queasy with the fats in them, though as the trip plays out there are less and less contents in the soup. Turns out a truck carry vegetables was held up at the Chile border and by the time those vegetables reached camp they were ruined. Kavitha has a theory that the carbs are better ingested if there is some chilli added – tabasco is ideal but we use up the scraps in a stray bottle very quickly. While on the mountain we have thrown out our sugar discipline and are scoffing lollies and chocolate bars. They are a quick source of energy and when grinding up the hill you can feel their benefit immediately. However soft, jelly sweets seem better than boiled sweets – the latter seem to extract more energy than they give and I find myself spitting them out.

The porters arrive up from Plaza de Mulas where they have their own camp and start to take ours down. We have to scamper to get our gear vacated as a couple of enthusiastic chaps start to pull our tent down around us. We spend a bit of time allocating gear into two sacks, each to weigh no more than ten kilograms. The electronic hand scales we use give an accurate weight and show we are a kilo under the limit, but the old brass butchers scales the porters pull out show we are 1kg overweight. Of course they do! Thanks to some dodgy scales they buy themselves some weight but are quick to tell you they are carrying 20kg. 18kg actually, buster. But I only object in my mind and we don’t argue but rather shift some gear around until the porter is happy. And if the porter is happy then so are we. Not carrying all that weight upstairs means we stand a fighting chance of getting to the top.

We depart Camp Canada at 1053. The sun has thawed us out and ensured I am not overdressed. Long pants. T-shirt and thermal top are enough at this altitude and with this bright day. The wind does force a skull cap and Goretex on by lunch time but that is okay. Nothing more debilitating than having unwanted thermals on. The climb to Camp 2 (Nido de Condores (Nest of the Condor) takes us up a saddle that is perhaps one kilometre wide and which endlessly rolls up above us in a perpetual false crest. That crest requires all your mental energy to refrain from being distracted by it. Just keep looking at the ground and minding your next step and next breath. It’s 550m straight up but of course the track zig zags its way upwards and it’s across the loose gravel to which we have become accustomed so it’s not a straightforward path. The gradient in most parts would be 1:6 to 1:8 but it rolls out near the top, across a large patch of snow to 1:4. Sounds easy and at sea level could be jogged by a semi-fit smoker. But at 5000m we are down to half the oxygen (~10%) which is available at sea level (~20%) and that factor alone changes everything up here.

The tempo is slower than slow yet on occasions our guides have to slow us up. Walk a slow bushwalk pace such as you might walk at home and you are still travelling too fast. That slow pace underscores the way distance is measured in hours rather than kilometres.

We pull through an ice/snow field and turn upwards left to behind a large outcrop and enter Camp 2. A windsock, bright fluro orange has marked the proximity of the camp for the last hour or so but I’m not convinced it ever seemed to get any closer. But we eventually crash land at Nido de Condores at 1445, after roughly a four hour shuffle grind. By the time we enter camp we are very keen to get out of the wind which is now whipping up over that ice/snow pack and chilling everything. I also suspect that the shape of the ridge is acting something like an airfoil, encouraging the wind, and there is very little to break it save for this outcrop of rock, which is why everyone is camped behind it in a tight village of yellow domes. Suddenly my Goretex shell is not quite enough but it takes a while to wake up to the fact that all its vents were wide open – I had opened for our climbing at lower altitudes where it was comparatively warmer. No wonder I was feeling so chilled around my midriff!

A tent is waiting for us and once we find it we drop gear, lay out foam mattresses (goose down comes later) and get out of the wind. It’s something of a crash landing and we catch our breath before worrying about pumping up the goose down mattresses. It’s good to be out of the wind and in the relative warmth of the yellow dome. They are remarkable little ovens. The chill factor out there might be around -10 to -20C but if the sun is out, and it mostly is, the tent temperature can be 30C or more. Even as I journal this we are fiddling with a combination of doors and vents so we get some cool air to flush out the heat. But not too much thanks!

As we get our breath back Danilo turns up at the door with a thermos of hot water and a selection of coffee and tea. It’s very welcome. But so too is Danilo who, like his two colleagues is a cheery and positive leader. He is very self assured yet also very self-deprecating, reminding us he is an assistant only. He does add that he has aspirations of being a fully qualified guide. He is endlessly cheery, positive and helpful. Nothing is too much trouble. He is a more demonstrable fellow that his two colleagues and is chirpy and quick to talk. We are grateful too for his good command of English which has often helped us resolve uncertainty from the Portuguese instructions. He studied sport at school and tells us he was not good at maths. This will be his fourth summit if we make it, but he is resigned to the possibility that if anyone has to be guided off the mountain early then the task will fall to him.

Jorge reminds me of David Paton. A farmer from Patagonia he is equally generous and kind but he is reserved and economical with what comes out of his mouth. He is very kind with leading a slow pace and is very quick to help where it’s needed. Eduardo is enormously generous as well, even as the expedition leader. He’s kind and encouraging and is quick with his praise. We’ve grown to appreciate and have confidence in his leadership.

It’s 1743 and our guides are now cooks and the cook’s tent is a hive of activity and chatter. Over the top of their tent and looking pretty much due West huge cumulus boil up into impressive thunderheads. I have no idea if this means anything for us but I did prefer the look of last week when we pretty much saw no clouds whatsoever. But as Danilo noted earlier he is less perturbed about the clouds and more worried about the wind. Speaking of which, it’s a gentle 10kts or so, gusting to 20kts every now and then. Not very windy but it is super cold. Its frigidity is only offset by the hothouse effect of our tent but that will change with the flick of a switch the moment the sun drops behind those Chilean mountains.
O2 saturation 70%.

First Entry in this Journal