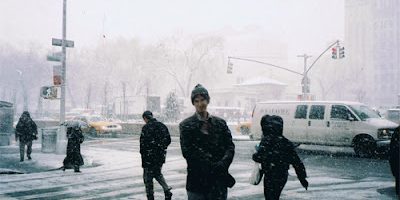 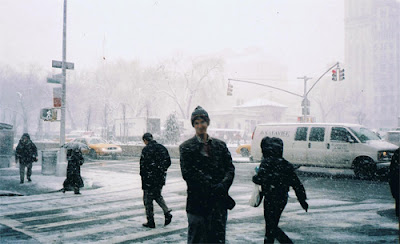 Yesterday afternoon I caught the Amtrack up from Philly. I planned on working but it was freezing outside and warm as toast inside. I think I only heard three bars of clickety clack music and I was asleep. I woke just as we arrived at Penn Station. I had an address for the hotel which I saw was in 7th Avenue. I counted the blocks and figured there was only a short distance to travel. I had a case for each hand, was wearing only a suit and business shirt and in the warmth bliss of the station figured this would be a quick and bracing trip. After a block I can confirm the bracing, but not the quick. Stupidly I walked past a man selling mittens of a dollar. Not one man actually. About five. By the time I had cleared the station they were well gone. So on I pushed. Block after block after block. Across Broadway, up 7th Ave, through Times Square and on and on. Slower and slower. More and more braced – stiff. I did not realise just how stiff until I arrived at the hotel reception and was unable to speak, unable to put my cases down and appearing like a mute before the rosy faced receptionist. She seemed to know what was going on and pointed me at a corner near a heater, beside which which I thawed, eventually released my hands and then attempted to sign in again. But even though I could mumble (the jaw needed massaging to help it along) I could still not hold a pen. She accepted a scrawl.

This morning I was more rugged up but we ventured out (on 7th Ave rather than the pavement, with large chunks of ice smacking into the ground every now and then from off the skyscrapers, warning us off) to meet a prospective client, only to make it two blocks before a snow flake stopped us in our tracks. We glanced at each other then continued on. By the end of the block it was falling heavily enough to dust us. We back tracked and purchased beanies and mittens (at which point this photo was taken) and just as well since in the intervening minutes a blizzard whipped across the city and the first dustings had turned into an assault in which you could barely hold your eyes open. By the time we scouted out the location of our client we looked like a couple of cold and bedraggled half-beats. We have an appointment elsewhere this afternoon – lets see what that looks like in this weather. And if we can scrub up sufficiently to make the right impression.Thanksgiving 2003